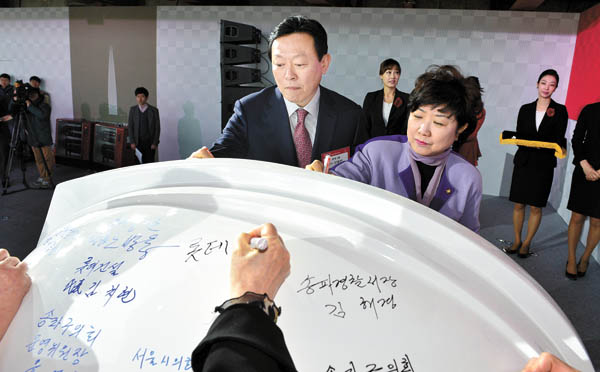 Shin Dong-bin, chairman of Lotte Group, was appointed chairman of Lotte Holdings in Japan, finalizing a succession process for the retail empire that his father built. He now controls Lotte’s businesses in Korea and Japan.

The succession comes after the abrupt departure of his older brother, Shin Dong-joo, in January. The older brother used to run Lotte Japan, while the younger brother controlled the business in Korea.

Lotte Group said on Thursday that the board of directors of Lotte Holdings unanimously agreed to a motion appointing Shin, the second son of Lotte Group founder and General Chairman Shin Kyuk-ho, as the Japanese unit’s chief during a regular board meeting.

“I would like to accept the directors’ decision both somberly and with humility,” the younger Shin said at a meeting with executives of Lotte affiliates. “I will take the decision of General Chairman Shin Kyuk-ho and will fulfill my responsibility to lead the businesses in Korea and Japan.”

Earlier this year, Shin Dong-joo also lost his positions at three other affiliates of Lotte Group. He was previously the vice chairman and CEO of Lotte International, vice chairman of Lotte Co., a confectionery affiliate in Japan and had an executive post at Lotte Ice Cream.

In January, the younger son made visits to Japan, sparking speculation that he intended to succeed his brother. The dismissed son came back to Korea and was rumored to have discussed the issue with his father.

Founder Shin Kyuk-ho set up the Lotte Group in 1948 in Japan. After 18 years, the group built Lotte Confectionery in Korea. Lotte’s headquarters is in Japan and the Korea business is technically a branch.