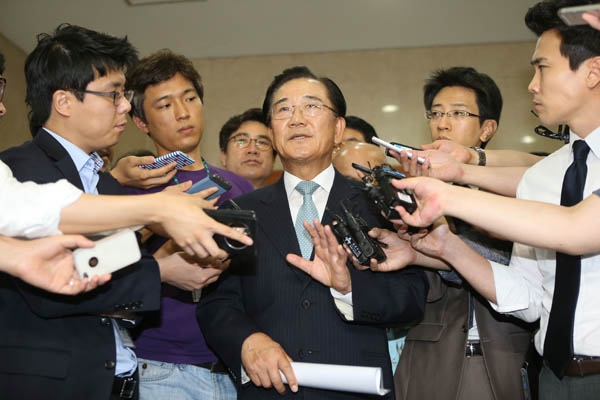 Park Joon-yung, a former three-term South Jeolla governor, holds a press conference to announce his decision to leave the main opposition New Politics Alliance for Democracy (NPAD) on Thursday at the National Assembly. By Shin In-seop

Park Joon-yung, former three-term governor from South Jeolla, announced on Thursday his decision to leave the main opposition party, dealing a massive blow to the embattled leaders of the New Politics Alliance for Democracy (NPAD).

The 68-year-old political veteran, who served as governor for three consecutive terms from 2004, is known as a loyalist to the late President Kim Dae-jung and served in his administration as the senior public affairs secretary and spokesperson.

“In the past several elections, the NPAD has been pronounced dead by the people,” Park said in a press conference on Thursday.

He went on to criticize the party’s senior leaders, led by lawmakers with an allegiance to the late President Roh Moo-hyun, who he said have largely disappointed the public with their high-handed, factionalist behavior and self-serving brand of politics.

The party has also lost public trust, Park said, by having formed an alliance with the now-disbanded Unified Progressive Party (UPP).

The NPAD, which has 130 lawmakers, is currently engulfed in a factional war, split between those who have an allegiance to the late President Roh and those who do not. Party Chairman Moon Jae-in is a Roh ally.

While the ruling party is failing to determine a proper direction for the country, the people are no longer treating the NPAD as an alternative, he said, citing that as the primary reason for his departure.

Sources close to Park said he had been discussing the possibility of creating a new political party with other senior NPAD members, including Rep. Park Joo-sun and standing adviser Chyung Dai-chul.

The three met with former Gwangju Mayor Park Kwang-tae and former NPAD lawmaker Chung Kyun-hwan last week, when they reached a consensus that the main opposition did not have a chance in the next general election under Moon’s guidance.

The former governor is the latest NPAD member to leave the party amid a series of initiatives by liberals to create new political groups.

On July 9, about 100 former and incumbent officials from the main opposition abandoned their political affiliations to create a new party, signaling an imminent and massive restructuring of the liberal bloc.

The group, known as the Age of People’s Hope - most of whom are from Gwangju and the Jeolla region, the traditional base for the opposition - and its leader, former Deputy Secretary General Jeong Jin-wu, held a press conference last week to denounce Moon’s leadership and vowed to promote moderate, reformist politics.

Earlier this month, a group of NPAD lawmakers, disgruntled with Moon’s leadership and the party’s continuous internal battles, also discussed a plan to create a new political party. Eight veteran lawmakers discussed their future with the party, while Rep. Kim Dong-cheol, a three-term lawmaker who represents Gwangsan A in Gwangju, brought up the possibility of a new party if the NPAD failed to mend internal ruptures, they said.

Over the past few months, the NPAD has faced the increasing threat of a split. The first sign came when veteran lawmaker Chun Jung-bae, a former justice minister under the Roh administration, left the party on the eve of the April by-elections and won a seat in Gwangju on an independent ticket. Chun has said he will also create a new political party.