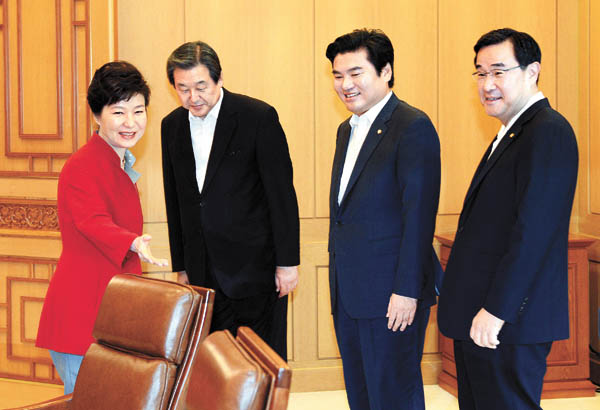 President Park Geun-hye promised to consider the ruling party’s recommendation to give high-profile businessmen special pardons next month, the floor leader of the Saenuri Party said on Thursday.

Park met with leaders of the Saenuri Party, including its Chairman Kim Moo-sung, at the Blue House in the morning. The newly appointed floor leader, Rep. Won Yoo-chul, and the new chief policymaker, Rep. Kim Jung-hoon, also attended.

The ruling party leaders proposed to the president the granting of special pardons to a large number of minor convicts whose livelihoods were at risk, Won said. In order to help the economy recover, high-profile businessmen should also be given special pardons, they proposed.

“The president said specific reviews are currently ongoing about the scope of the special pardons and the party’s recommendation will be considered,” Won said.

Earlier this week, Park ordered her senior secretaries to start reviewing the scope of special pardons for Liberation Day on Aug. 15. This year marks the 70th anniversary of Korea’s independence from Japan’s colonial rule, and Park said her decision to issue special pardons was for the “country’s development and national unity.”

While it is customary for Korea’s presidents to issue special pardons on holidays such as Liberation Day, Park herself has refrained from the practice. She has granted clemency in one instance, in January 2014, to 5,900 people convicted of minor crimes. No high-profile figures were pardoned.

Park has been particularly wary about issuing special pardons to convicted businessmen because she doesn’t want any hint that she is in the pocket of Korea Inc. Her promise Thursday to think about the party’s recommendation was seen as a sign she may give some.

While asking Park to grant clemency to high-profile businessmen, Chairman Kim proposed that politicians should not be pardoned, according to Rep. Kim, the chief policymaker.

During the meeting, Park and the ruling party leaders also agreed that the strained relations between the Blue House and the party will be restored as soon as possible. High-level consultations among the party, administration and the Blue House will resume to coordinate policies, according to Chairman Kim. The last such meeting took place in May.

Relations were severely strained after Park became dissatisfied with the party’s performance in the National Assembly, particularly over a political deal struck by its former floor leader, Rep. Yoo Seong-min, in order to pass one of Park’s key ambitions, the overhaul of the money-losing civil servants’ pension system.

Yoo eventually stepped down from his post on July 8. Thursday’s meeting between the president and the ruling party leaders were clearly aimed at mending the rupture.

“The Saenuri Party always thinks that the Park administration’s success is our success,” Kim said. “For the success of the president, the party will work responsibly.”

Park asked for the cooperation of the new floor leader and chief policymaker to push forward her political agenda. “There’s an urgent reform agenda that must be pushed forward by the party, the administration and the Blue House in unison,” Park said. “The reform of the civil servants’ pension scheme was one of them, but there are others, such as labor market reform. They should be implemented smoothly to revive the economy and accomplish another economic leap.”

During the meeting, the Saenuri leaders also proposed that the president meet with leaders of the ruling and opposition parties, and Park replied that she noted the recommendation, according to Won.

The ruling party leaders promised their full support for a quick passage of the government’s plan to use a supplementary budget to boost the sluggish economy in the aftermath of the Middle East respiratory syndrome outbreak and the drought, Won said. The ruling party also promised to pass economy-related bills during the July legislative session.

Following her 40-minute meeting with the leaders of the ruling party and her aides, Park met with Saenuri Chairman Kim alone for about 20 minutes. Kim refused to elaborate on what was discussed.

“We shared our concerns for the country in an amicable mood,” he said.

During his one-year control of the ruling party, Kim had three chances to meet with Park alone. The first meeting lasted just five minutes, when Kim paid a visit to the Blue House after his election victory as chairman last July.

The second meeting took place hours before Park’s departure for Latin America on April 16, when Park faced a political storm. They discussed a corruption scandal that engulfed her administration, including then-Prime Minister Lee Wan-koo.