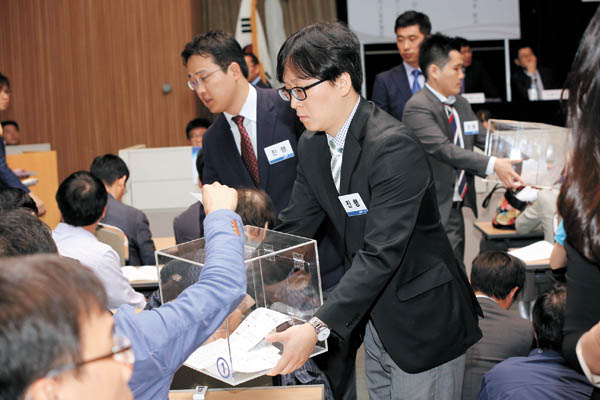 Shareholders of Samsung C&T put their ballot papers into boxes at the aT Center in Yangjae-dong, central Seoul on Friday. [NEWSIS]

Samsung defeated a campaign by a U.S. hedge fund to block a planned merger between its affiliates as shareholders of Samsung C&T approved its takeover by Cheil Industries during an extraordinary general shareholder meeting on Friday.

Choi Chi-hun, the co-CEO of Samsung C&T who presided over the meeting, said that 69.53 percent of votes cast were in favor of the merger, higher than the required 55.7 percent. A total of 553 stakeholders and their representatives attended, whose shares account for 84.73 percent of all the shares with voting rights.

Under the plan, the merger will be completed by Sept. 1.

The approval allows the Samsung Group a restructuring that is part of a generational leadership shift. The merger is certain to help the Lee family exert more influence over Samsung Electronics and is seen as a necessary step as the conglomerate prepares to make a generational change from the now-hospitalized Lee Kun-hee to his 47-year old son, Jay Y. Lee.

It was a blow to Elliott Associates, one of the most influential activist investment firms and third largest stakeholder of Samsung C&T, which said the terms of the deal were unfair to Samsung C&T shareholders.

Cheil is offering 0.35 shares for each Samsung C&T share in an all-stock buyout, valuing C&T at about 8.9 trillion won ($7.7 billion) according to market observers. That is way too low, according to Elliott and other minority shareholders.

The meeting, held at the aT Center in Yangjae-dong, southern Seoul, turned into a messy battle among Samsung C&T investors holding different views on the merger. The gathering lasted more than four hours.

It was scheduled to start at 9:00 a.m. but was delayed over 30 minutes due to the large number of proxy statements submitted. The National Pension Service, the single largest shareholder of Samsung C&T, also sent a statement expressing its intention to approve the merger.

By contrast, a Cheil shareholder meeting held at Samsung Life Insurance Building in Jung District, central Seoul, started on time and shareholders gave a green light to the proposal in 20 minutes.

The meeting room for the Samsung C&T shareholders, designed to accommodate around 100 investors, was so densely packed that some had to sit in the aisles and along the backside.

Minority shareholders were vocal and emotional about their opposition to the merger.

“The fact that the merger complies with legal requirements doesn’t necessarily mean that the deal is done in a fair and justifiable manner,” said one minority shareholder.

“If the merger ratio was set at 0.6 or 0.7, the situation would not have turned out like this,” he said.

The investor proposed that the ratio be revised, but Choi responded that the change was not possible.

Some stakeholders including Elliott stressed that the sales and asset value of Samsung C&T is either comparable or superior to Cheil.

A legal representative of Elliott made its case, reiterating the fund’s stance that the merger ratio is against the interests of Samsung C&T shareholders.

“Elliott is disappointed that the takeover appears to have been approved against the wishes of so many independent shareholders and reserves all options at its disposal.”

The battle exposed some contentious issues for Korea such as corporate governance and shareholder rights, and many opinions about those issues were aired at the meeting.

The complex ownership structure and internal transactions between affiliates of the same parent company often obscure transparency in Korea’s conglomerates, or chaebol.

Even some who agreed to the merger pointed out how minority shareholders were being ridden roughshod.

“I agreed to the agenda for the sake of national interests,” said a minority share holder. “But I give approval on the condition that Samsung C&T stop silencing small investors.”

Elliott also suggested the articles of incorporation of Samsung C&T be amended to allow dividend payouts in non-cash assets and for interim dividends.

But the two motions raised by Elliott failed to be carried.

Samsung C&T and Cheil said they will live up to their promises of enhanced corporate governance.

“We will try our best to increase shareholders’ value and act on the plans that we proposed to enhance the rights of shareholders.”