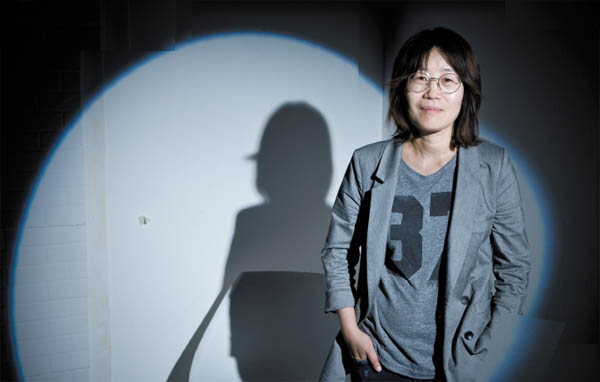 Film director Shin Su-won compared making films with running a marathon. Although it takes a long time to complete, she cannot complain because she chose the path herself. By Kwon Hyuk-jae

The dark side of Korean society, where only the strongest can survive, is powerfully portrayed in the Cannes-invited feature “Madonna” (2015).

Director Shin Su-won’s latest project, released in early July, focuses on the harshness of society, where people gain nothing even after endless hours of hard work. The flick revolves around a character in her 20s named Mi-na, who can’t expect anything worse to happen to her, as she has already hit the bottom.

Although only 400 million won ($360,000) was invested into making the X-rated movie, it has seen steady ticket sales, giving it a solid position among various hits, including “Northern Limit Line” and the renowned Hollywood sequel “Terminator Genisys.”

Despite directing a series of well-received films, including “Passerby #3” (2010) and “Pluto” (2013), Shin actually entered into the movie industry at a late age, directing her first full-length film, “Passerby #3,” at the age of 43.

The director, who had worked as a middle school teacher for 10 years, has gained recognition in the movie industry after becoming the first female Korean director to be honored with an award at both the Cannes Film Festival and the Berlin International Film Festival.

In contrast to her glorious achievements, when meeting with the JoongAng Ilbo for the interview, Shin was wearing casual clothes with a T-shirt and worn-out denim pants, just like any other director.


Q. Now that the movie has been released, how do you feel?

A. I actually feel calm. I went to the theater to observe the audience’s response towards the film on its opening day [on July 2]. “Madonna” hasn’t opened in many theaters, as the number of screens only amounts to 60. So, I felt very thankful when I found out that some people spent an hour on a bus to come and see my movie. But to tell the truth, “Madonna” is not an easy film for ordinary people to watch [because of its severe story line]. I even found some people cry when seeing the film, and I feel that younger people seem to find it more difficult and uncomfortable to see the movie [as the story portrays the dark reality faced by the younger generation].

There seems to be some scenes that could make the audience feel a little disturbed.

“Madonna” is not the kind of movie that makes viewers feel happy after seeing it. In fact, it is definitely the project that gnashes people’s likes and dislikes. When creating the work, I focused more on communicating with the public instead of how the film would be evaluated by movie critics. Director Lee Chang-dong [of “Oasis” (2002)] once said, “When filming a movie, communication with the audience should be at the director’s best interest,” and I agree. Based on this idea, I was a little concerned that I may have made the life of Mi-na a little too harsh.

Can you elaborate on what you mean by “harsh?”

The movie is as bitter as dark chocolate or black coffee. Even though blood doesn’t appear in “Madonna,” because it isn’t my type of thing, I directly focused on the hidden side of capitalism, [which can be very cruel, as shown in the film]. It seems like the world is becoming more and more depressing these days.

What makes you think that the world is turning gloomier?

When working on the screenplay for “Madonna” two years ago, I saw a homeless woman in her 20s walking into the cafe where I was doing work, and she became the motivation for my project. Even though it was summer at the time, her face was hidden behind a woolen hat and her hair was covered with vast amounts of dust, not to mention being greasy. A multitude of thoughts passed through my head after seeing that poor girl. After seeing her, I felt that the lives of the working class are collapsing. When people who are currently in their 40s or 50s were growing up, they had opportunity. Even those people who were born from a poor family could seize an opportunity to succeed if they worked hard enough. To summarize, people could be rewarded for their efforts. However, as the popular drama “Misaeng” (2014) shows, today’s people in their 20s and 30s don’t seem to have a future.

But isn’t the phenomenon common in other countries too?

Yes, I’m well aware of that. When I went to Paris two years ago, I saw a pregnant Arabic woman begging for food on the Avenue des Champs-Elysees. But still, Europe has a stronger social security network than Korea. Some foreigners who watched my latest movie commented that it seems like a fantasy movie. To them, the story seemed too unrealistic to believe. But to tell the truth, anybody could become Mi-na, [whose life can never improve due to the social barriers].

Do you usually view the world with a pessimistic eye?

Not necessarily. In fact, when I first got involved in the movie industry, I wanted to work on comedy, which can be clearly seen in my first full-length film, “Passerby #3.”

“Passerby #3” draws upon the story of a housewife striving to become a film director, which somewhat seems to be related to your life.

My dream was to become an artist when I was young. I was actually pretty good at drawing. But even though I craved to get into a college of fine arts, the tuition fee was too expensive for my family to afford. That’s why I chose a major that required an inexpensive tuition fee that also guarantees a future with financial stability. So, I ended up studying education at Seoul National University. After graduating, I became a teacher, mostly teaching the subjects of social studies such as geography, world history and political economy.

Why did you suddenly change your career to directing films?

I entered the Korea National University of Arts in 2000 and studied screenwriting. I initially chose to study at the school because I wanted to write novels. But I discovered a whole new world after studying films. Even though I have never done drugs, studying movies made me feel like I was completely addicted to something. I began studying film without knowing anything about it, but I fell in love with the happiness that follows after I create something. I also liked working along with crew members.

Did you get tired of your job at a school? One of your films, “Pluto” (2013), severely criticizes education for the entrance exams.

I liked being with my students. But I couldn’t work as a teacher and a film director at the same time. When handing in my resignation, my hands trembled so hard. Even though people around me tried to stop me from quitting my teaching job, which is perceived to be the ideal occupation for women in Korea, even a married woman like me can have a dream. If I could do it again, I would still make the same choice.

Have you encountered any difficulties being a female director?

Film sites tend to be quite harsh. I have to be able to communicate with various staff members. Even if I make the same mistake [as a male director], I hear people murmur that I made the slip because I’m a woman. In response to such comments, I just pretended not to have heard them because that is the only way that I can lead them as a team. These days, however, I feel a lot more comfortable.

Do you have any future plans as a film director?

You never know what will happen in the movie industry. Not being able to garner investment means that you’re completely doomed. Like director Im Kwon-taek, I yearn to stay in this industry for as long as I can. It is my earnest desire to be able to shoot films even when I become an old, white-haired lady. For the follow-up to “Madonna,” I’m planning to create a somewhat less harsh story related to love. I also wish to attempt shooting abroad.

The woman shown in the top photograph, who is carrying a child on her back, is the first Korean female director, Park Nam-ok. 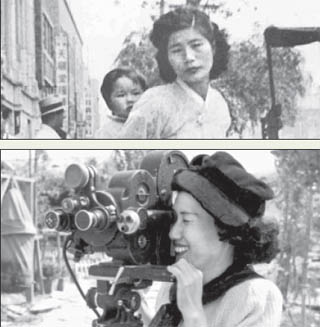 Park, who is currently living in the United States, is said to have carried her child on her back while shooting films because she had nobody to look after her baby.

Park’s “The Widow” (1955), or “Mimang-in” in Korean, deals with the damage that the Korean War caused for the nation’s female population.

Director Shin Su-won first accessed Park’s work four years ago, when she was working on a TV documentary that shows how the lives of women have changed over the past 50 years.

According to Shin, “Director Park is said to have even provided meals for her staff members in order to complete the film. Seeing what she did got me wondering whether I would have been able to achieve becoming a film director if I were born in her generation.”

Another woman who cannot be ignored when talking about female directors is the second Korean female director, Hong Eun-won, pictured at bottom, who also worked as a scripter and screenplay writer. Hong left three works: “Female Judge” (1962), “Sole Mother” (1964) and “What Misunderstanding Left” (1966).

Shin described Hong as “the person who represents the history of Korean movies,” and added that, “Her work shouldn’t be forgotten.”