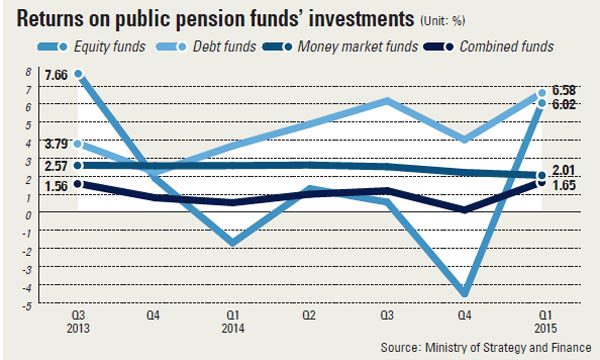 According to data unveiled Tuesday by the Ministry of Strategy and Finance, public funds had an average return of 2.98 percent last year. The average return in 2013 was 2.6 percent.

The NPS gained from investments in real estate at home and abroad, overseas stock markets and debt funds, while losing on investments in local equity funds,

Despite its success compared to other local funds, the NPS’s return rate is still substantially lower than its counterparts in other advanced nations.

According to a report from the Korea Development Institute (KDI) in May, many national pension funds saw returns above 10 percent. The California Public Employees’ Retirement System in the United States saw a return of 18.4 percent last year, followed by the Canada Pension Plan Investment Board at 16.5 percent and Sweden’s AP1 at 14.8 percent.

KDI’s May report advised that the NPS should boost returns by having an independent asset management board to oversee investment decisions and setting a clear investment goal to achieve a certain level of returns every year.

The National Health Promotion Fund, mainly funded by the government’s tobacco tax, had the smallest return last year, at 0.12 percent.

The Teachers’ Pension Fund was the most aggressive investor last year, investing nearly 25.3 percent in the local stock market and stock-associated fund products.

The fund’s return was below average, at 2.63 percent.