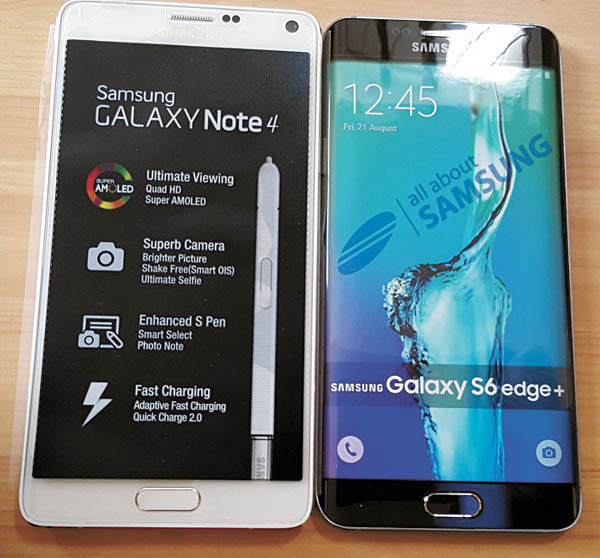 Leaked images of Galaxy Note 4, left, and Galaxy S6 Edge Plus posted on All About Samsung, a German website.

German website All About Samsung leaked what appear to be images of the upcoming Galaxy S6 Edge Plus last Friday, showcasing a larger display than predecessor S6 Edge.

The new model is set to be unveiled on Aug. 12 in New York alongside the Galaxy Note 5.

According to the images, the S6 Edge Plus will have a 5.7-inch screen that is 0.6 inches larger than its predecessor S6 Edge and the same as that of Galaxy’s phablet Note 4.

All About Samsung, written in German, says the images are of a dummy S6 Edge Plus sent to a store. 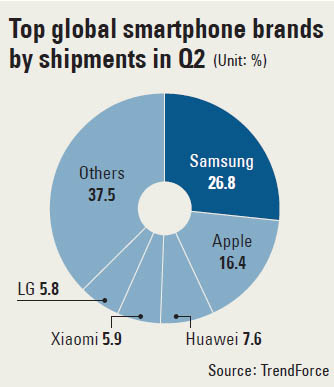 Specifications leaked last month suggested that the device will have 32 gigabytes of storage, 16-megapixel rear and 5-megapixel front cameras, and will be powered by Samsung’s proprietary Exynos processor - the same as its predecessor. But the new model will have a much bigger battery capacity at 3,700 mAh, compared to 2,550 mAh for the S6 Edge.

“The new S6 Edge Plus has reflected the popularity of having the curved screen on each side, and its bigger screen aims to appeal to customers in China who prefer larger devices,” said Lee Seung-hyuk, an analyst with Korea Investment & Securities.

The S6 Edge Plus is expected to help Samsung compete with the currently unknown upgraded versions of Apple’s iPhone, the 6S, expected to be rolled out in September.

Samsung has much at stake with the upcoming models.

The S6 and S6 Edge fell short of projected combined shipments in the second quarter at 20 million to 21 million, up to 3 million devices less than projected, according to brokerage firms, after Samsung Electronics released its second quarter guidance report on July 7.

Both new models will also be embedded with Samsung Pay, a mobile payment system first introduced through the S6 and cousin S6 Edge. The performance of Samsung Pay in the next batch of phones will offer a peek into how successful the system might be when it faces challenges from Apple and Google, both of which offer their own mobile payment platform.

Still, Samsung led in smartphone shipments, with 26.8 percent of the global market in the second quarter, according to Taiwan-based market researcher TrendForce on Wednesday.

Apple followed suit with 16.4 percent, down from 20.5 percent in the first quarter, whereas Samsung maintained the same percentage.

China’s Huawei came in third at 7.6 percent and Xiaomi trailed with 5.9 percent to outpace LG by a margin of 0.1 percentage point.

But the report also offered a worrisome forecast for Samsung. It said Samsung’s latest flagship model Galaxy S6 and S6 Edge’s annual shipment prediction has been marked down to 4.5 million units from 5.5 million, based on the latest estimates as Chinese vendors are taking more shares of the low- to mid-range product market.

“Samsung’s ability to reverse its fortune may hinge on the success of its Galaxy Note 5,” said analyst Avril Wu.

“If this device is able to attract consumers with upgraded specs and new features, Samsung will avoid the high possibility of negative shipment growth for this year.”

Analysts said the next-generation iPhones due to launch in September offer no major changes in appearance, but will include Apple’s new A9 processor and 2 gigabytes of memory for the first time.

The research firm was upbeat on the prospect of iPhone shipments for this year, predicting 15 percent growth year-on-year.

But the analyst adjusted LG Electronics’ annual shipment growth down to 8 percent, saying its latest G4 smartphone’s hardware improvements are not as exciting to consumers compared to the upgrades made to its predecessor G3.