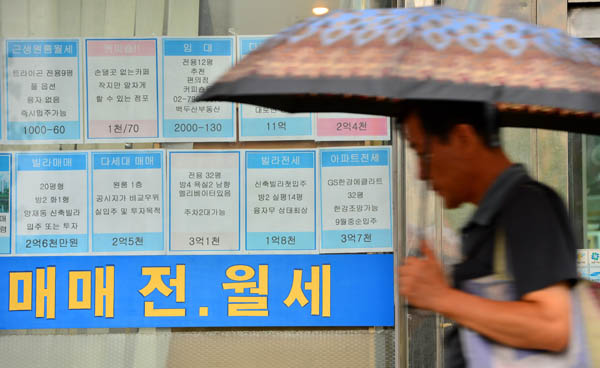 A real estate agency advertises key money prices of apartments in Yongsan at over 300 million won on Friday, when the average jeonse price of rentals nationwide exceeded 200 million won for the first time. [NEWSIS]

The local real estate market, both rental and sales segment, is quickly heating up even before the kickoff of the autumn moving season.

Due to their limited supplies, jeonse, a two-year lease system unique in Korea, are harder than ever to find, while their prices are on a steep upward curve at rates that are hard to catch up with for an average household.

Renters complain of sharp increases in jeonse prices, but the reality is you are lucky to find one regardless of the price, as a growing number of landlords are listing their apartments for wolse, a combination of a security deposit and monthly rent.

Jeonse contracts only require a lump sum security deposit that is returned two years later, and it has widely been used in local markets as it was a financially desirable arrangement for both the renter and the landlord. 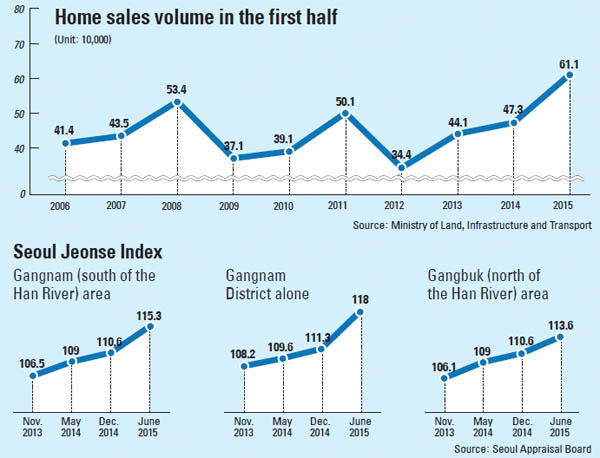 By putting down a large sum of cash that would be fully refunded two years later, the renter would not have to pay any monthly rent, while the landlord secures sizable liquidity for two years that could be put into banks for interest or in other assets, including properties.

But in today’s record-low interest rate environment where the key interest rate set by the Bank of Korea is at 1.5 percent, jeonse is not so desirable for landlords anymore.

They are getting less than ever in interest for a lump of cash sitting in their deposit accounts. So many of them are looking to get monthly rental payments at rates that generate higher returns than bank interest.

According to a real estate portal operated by Seoul Metropolitan Government, wolse contracts accounted for 33.8 percent or 4,743 of around 14,000 home rental contracts in Seoul in June, the highest volume since 2011, when the city government started collecting the data.

This comes as a double blow to renters; not only is jeonse fast disappearing from the market, but the few that exist also demand a lot more for a security deposit.

In Jamsil, southeastern Seoul, jeonse for 33-pyeong or 109-square meter (130-square yard) apartments popular for a family of four is priced at around 850 million won ($750,000), with few below that price range. The listed jeonse price accounts for nearly 85 percent of the sales price.

“Jeonse houses are out even before they officially enter the market,” said Kim Jeong-hoe, a realtor with Lucky Real Estate Office in Jamsil.

“Even if prices are high, renters are desperate to get them. Often, they sign the contracts without even seeing the house. The initial deposit is wire-transferred after the renter is briefed [about the house] via phone by the realtor,” she said, adding that wolse was relatively easier to get though less popular because renters shy away from monthly fees.

Monthly wolse payments vary depending on the size of the deposit, but they can easily become burdensome for jeonse renters who are not used to paying monthly rent.

And the steep gain in Jeonse price is not an isolated case in Gangnam where real estate prices have traditionally been high.

So amid a drought of jeonse and their price gains, many renters are mulling over home ownership.

“Two years ago, my landlord wanted to raise jeonse by 80 million won. This year, he has asked for a 120 million won increase,” said Kim Se-yeon, a 38-year-old homemaker in Yongsan, northwestern Seoul, adding that the family recently made a down payment for a new apartment being built in Sinchon, northern Seoul.

“My girl is starting school next year, so we decided to buy a home with a 15-year mortgage,” she said.

And the rise in volume of home sales have translated into home price hikes as well, bringing back long-awaited warmth in the local property market.

“A lack of available jeonse and the current low interest rate environment will likely fuel the property market in the second half of this year as well,” said Kim Kyu-jeong, an analyst at NH Investment & Securities.

The current transition, where former jeonse renters are starting to buy homes, will likely continue for some time, Kim added.

And more speculative betting on the real estate market has been seen as well.

Following the wild success of the latest strings of pre-sales of new apartments that are being built, more people are venturing out to buy older apartments with hopes they could see similar success once they undergo reconstruction.

A village of dilapidated apartments in Gaepo-dong in southern Seoul, built by Korea Land & Housing Corporation in the early 1980s, is a popular target of such speculative bets.

“I am hearing about how the pre-sales of new apartments in Banpo and Daechi have gone so well, some of them seeing as much as 400 million won premiums from the pre-sale prices,” said Gina Ryu, a 36-year-old restaurateur.

“This has sparked my interest in older apartments that are about to undergo reconstruction. I would have to get a substantial loan to finance the purchase, but I am still tempted.”

As the local property market has warmed up, so has the volume growth of house mortgage loans, raising concerns that in the event of an interest rate hike, households’ default risks could spike as well.

As household debts grew to hit a record 1,100 trillion won, Korea’s financial regulator on Wednesday unveiled a series of new measures aimed at curbing reckless loan growth and loans issued to financially unfit individuals and households. The new measures also encourage amortized loan types, a structure that pays principal and interest at the same time, rather than balloon loans - loans that pay off the principal years later or are rolled over.

While they have the potential to cast a chill over the real estate market, real demand for housing will not likely die down for a while, market insiders say.

“People want to settle down when kids start school and when there are very few jeonse available. People also grow tired of moving around every two years,” said Moon Ji-won, a realtor in Jamsil.

In fact, the market may see fresh sales growth prior to the new measures being implemented next year.

“Speculative investments may cool. But around here, a lot of inquiries [about purchasing] we get are from family jeonse renters who already live nearby and just want to settle down in their own home. ”