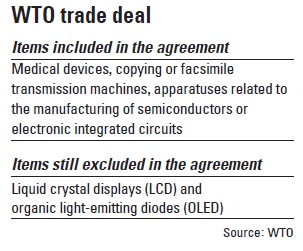 The World Trade Organization’s (WTO) decision to remove tariffs on IT gadgets is likely to benefit Korea’s tech giants, with the arrangement projected to reduce manufacturing costs and boost price competitiveness on newly listed products such as semiconductors and medical equipment.

The WTO announced on Friday that 54 member countries had agreed to a gradual tariff cut that will go into effect starting July 2016. The agreement involves 201 information technology products, a trade worth $1.3 trillion, according to the WTO.

Among the items are medical devices such as ultrasonic scanning apparatuses and X-ray tubes, machines related to the manufacturing of semiconductors, as well as microphones, audio-frequency electric amplifiers and electro-cardiographs.

The inclusion of semiconductor devices is particularly relevant to Korea as the country is home to the world’s leading chip makers, Samsung Electronics and SK Hynix.

But the exclusion of liquid crystal displays (LCD) and organic light-emitting diodes (OLED), two of the nation’s major exports, came as a disappointment. Korea is the home base of the world’s two largest TV makers, Samsung Electronics and LG Electronics.

China has been vocal in objecting to the categories on the grounds that the move could put Chinese TV manufacturers at a disadvantage.

Still, Korea can expect some benefits from the deal, as other agreed upon items encompass IT goods that China objected to including in the Free Trade Agreement (FTA) with Korea, citing the massive gap in competition.

The products include copying and printing devices and non-destructive testing equipment.

“Once the agreement, which involves 201 products, comes into effect, it will lead to an increase in sales of IT products, which account for a quarter of Korea’s exports,” the agency said in a statement.

The trade agency also painted positive prospects for the deal, which will undergo adjustments until it goes into effect next July. “China will likely offer concessions on more items than those agreed upon under the FTA with Korea,” said KITA Director Park Chun-il.

KITA cited the tax cuts in devices for monitor screens and memory chips as a potential driver for future exports in Korea.

Exports of IT goods were valued at $136.6 billion last year, making up 24 percent of all exports.

The shipment of tech devices proved to be resilient to hostile market conditions abroad during the first quarter.

Exports of IT products increased by 2.1 percentage points to $66.7 billion compared to the same period last year, despite the overall weakness in exports, which saw a 5.1 percent decrease.

The latest announcement is an update of the trade organization’s Information Technology Agreement signed in 1996.

The initial agreement excluded many IT products and high-tech items, such as computer game consoles.