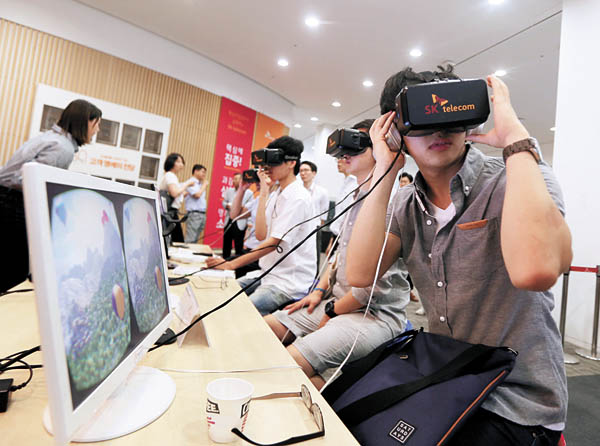 IT researchers experience virtual reality devices in a forum organized by SK Telecom on Wednesday at the company’s headquarters in Euljiro, central Seoul. Provided by the company

SK Group’s corporate culture developed under a philosophy known as the SK Management System, or SKMS, which was established by late Chairman Chey Jong-hyon in 1979. The SKMS encourages employees to reach “Super Excellent Level” - or Supex, a well-known term amongst employees - in each field they are working at with a challenging spirit and innovation, and to foster open-minded people who can bring in many creative ideas.

SK is widely recognized for bringing in creative and innovative ideas to the country, thanks to its semiconductor manufacturer, SK Hynix, and mobile service provider, SK Telecom.

The company said a key to continuing its success in the business is to invest in technology and employees. It said last week that the company decided to make additional investments of 280 billion won in the expansion of its Icheon plant in Gyeonggi, totaling an investment of 2.38 trillion won. The company said the decision was made in order to strengthen safety facilities on the plant’s production lines to protect workers. The aging Icheon plant was built in 1990. “We won’t have another second chance if we struggle again,” Park said in a recent interview with local media. “A key to not repeating such a bad history is to keep trying to innovate in technology and make employees produce creative ideas. The competition will get tougher every year. We are doing a fine job in D-RAM, but are still fourth or fifth in NAND flash memory in the global market, while China is chasing us from behind.”

The group’s mobile service provider, SK Telecom, is also trying to be a leader in the next-generation IT field. The company last week held a forum at its headquarters to discuss the present and future of augmented reality (AR) and virtual reality (VR) with global companies, including the Google and Microsoft. The company said it aims to develop service programs and technology that could make it a leader in the 5G period. In this forum, the company presented its technology development process for AR and VR and unveiled, for the first time, the “T-AR for Tango,” which it produced with Google. It is a program that allows people to place anything in virtual space by using 3D space recognition technology.

After introducing the program, the company presented its plans to support researchers, saying it will provide “T-AR for the Cardboard Software Development Kit,” which the company said would help researchers make applications for people to experience AR and VR.

“The 5G period that is coming soon will provide a service that can cross the boundary between real and virtual spaces,” said Choi Jin-sung, a spokesman for SK Telecom. “By holding a forum like this, we can share the world’s IT trends and provide a chance for people to actually experience advanced technology. But one of the most significant things to realize for these great technologies is that we need to provide an environment where people can work, meaning we shouldn’t stop fostering competitive IT researchers.”

The company said its success in every business depends on how they raise great employees. The company encourages workers to set their own goals in their career and provides programs to help them accomplish their goals. One of the biggest focuses is education.

One of SK’s well-known programs is the “T-Stay” program run by SK Telecom. Started on Jan. 31, 2012, more than 35,000 employees have attended 384 sessions, meaning statistically, each employee has participated in the program nine times. The company said it conducted a survey with employees in 2011 to provide an improved education program and found that the workers were seeking programs that can actually teach intelligence and skills that are necessary in the actual working field.

One of the most popular programs was the “Luncheon T-Stay,” held during a lunch break. The company said it was extremely popular and that more than 600 people participated each time. In the program, the company gave English speech lessons and discussed big data and social media.

“The T-Stay program provides diverse programming, including programs that can help employees’ work, such as in marketing and finance, and programs that help workers improve their communication abilities, such as in literature and psychology,” Choi said.

Since 2009, SK Telecom has also been trying to promote a woman-friendly work environment in cooperation with the Ministry of Gender Equality and Family. The company said it is trying to encourage female workers to vie for leadership positions and to remove any unfairness in wages and promotions. The company said the measure was carried out because encouraging female workers to engage more in social activities will be a new growth engine for the local economy.