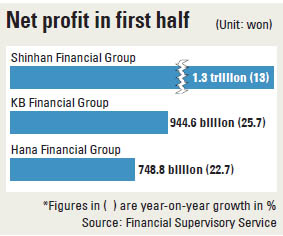 Shinhan Financial Group said in its regulatory filings last week that its first-half net profit was 1.3 trillion won ($1.1 billion), up 13 percent from a year ago. Its second-quarter net profit of 692 billion won was also up 19.8 percent quarter-on-quarter.

Its commercial banking unit, Shinhan Bank, saw its profits fall by 6.1 percent year-on-year due to weakened net interest margins, as the key interest rate set by the central bank fell to a record low 1.5 percent.

Shinhan Bank saw its net interest margin fall to 1.5 percent in the second quarter of this year, from 1.67 percent in 2014.

Non-banking units, including Shinhan Card, Shinhan Life Insurance and its brokerage unit, Shinhan Investment, accounted for 43 percent of the group’s profits during the year’s first half, up from 39 percent in 2014.

Net profits from its credit card issuer, Hana Card, were 11 billion won, up more than 250 percent. Its insurance unit, Hana Life Insurance, showed 22 billion won in profits, also more than 2.5 times its figure of the same period in 2014.

KB Financial Group saw its net profits for the first half of this year rise to 944.6 billion won, up 26 percent from a year ago.

Although the sheer size of its profits lagged those at Shinhan, KB also booked one-time costs related to a massive early retirement program; that lowered its profits by 345 billion won, analysts said.

In an effort to diversify its business portfolio and reduce its reliance on interest revenue, KB Financial acquired LIG Insurance late last year and set up KB Insurance earlier this year.

It has also increased corporate lending, which generally offers higher margins, and its lending to small and medium firms was up 6.2 percent year-on-year, while household credit lending rose 8.1 percent.

“KB Financial’s asset growth has slowed a bit, but its financial health is solid. I think its acquisition of LIG Insurance will pay off in the long run,” said Han Jeong-tae, an analyst at Hana Daetoo Securities.