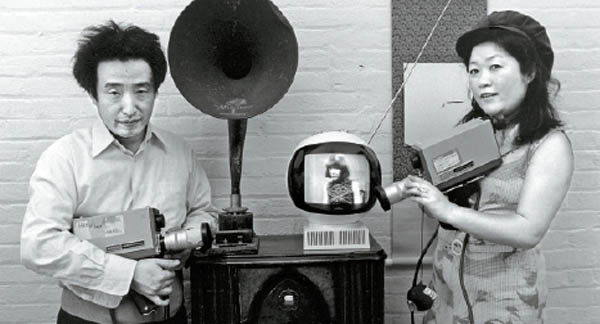 Nam June Paik and his wife, artist Shigeko Kubota, are shown in his New York studio in 1974. Provided by Woongjin ThinkBig

The cause was cancer.

“She was also an excellent artist, both in talent and passion,” said Suh Jin-suk, the director of the Nam June Paik Art Center in Gyeonggi.

One of Kubota’s most important works, “Duchampiana: Nude Descending a Staircase,” a 1976 video sculpture inspired by French artist Marcel Duchamp’s 1912 painting of the same name, is now part of a collection by the Museum of Modern Art in New York.

According to the book, “My Love, Nam June Paik,” co-written by Kubota and JoongAng Ilbo reporter Nam Jeong-ho, Kubota developed a crush on Paik that began when she saw one of his performances in Japan in 1964, when she decided to “become a famous artist to win him.”

They met again in New York later that year and soon became lovers, marrying in 1977.

Kubota and Paik were key members of the anti-art Fluxus movement, founded by George Maciunas in New York in the 1960s. She aroused sensation in 1965 with the performance “Vagina Painting.” In the performance, she affixed a brush on the back of her miniskirt and painted abstract lines in blood-red paint over a sheet of paper spread on the floor. It was considered to be a feminist twist on male-dominated Abstract Expressionism.

After Paik’s death in 2006, she made a number of video sculptures in his honor.

In an interview in 2012 with the Korea JoongAng Daily, she said, “It was not easy to live as the wife of a great artist and be an artist myself.”

“I had to use whatever materials Nam June did not use,” she continued. “And while Nam June’s works were spectacular, my works tend to be personal and delicate - so they could be easily overshadowed by his art. Still, I have worked hard to be an original and a good artist.”

The date of Kubota’s funeral has yet to be scheduled, Suh said.