Lacrosse is a ball for U19 Korea girls

Lacrosse is a ball for U19 Korea girls 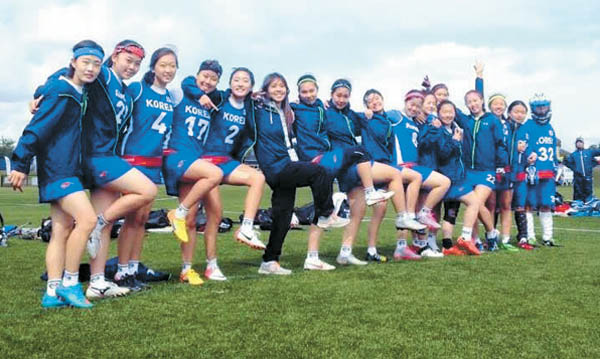 Korea’s U19 women’s national lacrosse team poses in Edinburgh after defeating Israel on July 23. Provided by the team

Golfers are not the only female athletes traipsing around Scotland these days. Although they don’t yet draw the attention that Korea’s wildly successful woman golfers command, the nation’s female under-19 lacrosse team is on a global stage, the Rathbones Women’s 2015 U19 Lacrosse World Championship, for the first time. Fourteen countries are participating in the tournament held by the Federation of International Lacrosse every four years.

Although the team started off with a 3-2 win against Israel on July 23, they have stumbled since, losing five consecutive games. On Wednesday, they dropped a match to the Czech Republic 18-5.

“It was a good game overall, and we really put effort into it,” said U19 national team defender Kim Young-heon, 16, by phone from Edinburgh, the site of the tournament. “And if we can beat Finland, we will finish in at least 12th place in the tournament.”

The competition at the University of Edinburgh ends Aug. 1.

Park Jae-hyun, 18, a forward who has scored three goals in the competition, said, “It’s my first time in an event this big, so honestly, I’m really nervous. At the same time though, I’m so excited and thankful to be given this opportunity and will try my best to represent our country.”

After besting Israel, the Koreans dropped matches against Colombia, Japan, New Zealand and Canada before falling to the Czechs. The match with Finland will be followed by one medal round game.

But the team’s head coach, Jang Hyun-il, was optimistic. He said that especially in a teens’ tournament, many nations have a much larger pool of experienced players available. Some of his players, he said, have been in the sport for only a year. But he added, “We are doing far better than I initially hoped for, even getting a win. I’m sure Korean lacrosse will improve as we make more appearances in big competitions.”

The writer is a KJAD high school intern.