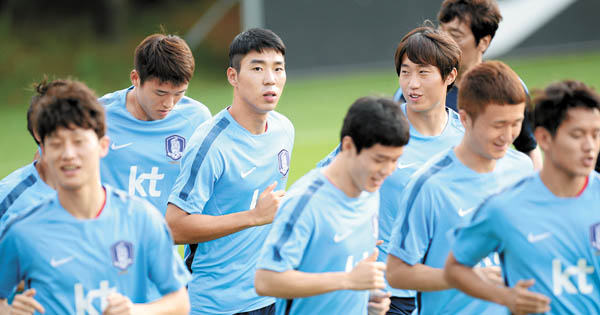 All matches are important in the EAFF East Asian Cup, but for Korea men’s football team striker Lee Jeong-hyeop, there is one match in which he can’t accept a loss.

Lee, 24, is currently a sergeant in the Korean Army, playing for the Sangju Sangmu military football club while doing his mandatory military duty. South Korea faces host China on Sunday and archrival Japan on Wednesday, but for the striker, the match against North Korea on Aug. 9 is special considering his status.

Sports and politics shouldn’t mix? Don’t tell Lee and his teammates that. On Thursday, they watched the new movie “Northern Limit Line,” which depicts the Second Battle of Yeonpyeong. Six South Korean sailors died in the battle against North Korean patrol boats that crossed the maritime border on June 29, 2002.

Lee says he is prepared to display “the power of the soldier” on the pitch. He was a surprise pick by Uli Stielike for the Asian Cup in January, but the former Busan I’Park striker scored two goals in the tournament and helped Korea take second place.

Along the way since then, he’s picked up the nickname “Gunderella” (Army Cinderella). Now he is one the core forwards on the national team and has scored four goals in 11 matches.

In an interview with the JoongAng Ilbo, an affiliate of the Korea JoongAng Daily, on Monday, Lee said his only goal at the East Asian Cup this weekend is to bring back the trophy for the first time since 2008. The men’s team, the youngest ever assembled by Stielike, will depart for Wuhan, China, today. The tournament will broadcast by JTBC3 FOX Sports in Korea.

Q. The match against North Korea should be very special for you.

A. People around me say, “Never lose to North Korea.” As a matter of fact, there will be the World Military Games in Mungyeong, North Gyeongsang, in October. It isn’t certain whether North Korea will be there, but still, we in the Korea Armed Forces Athletic Corps are preparing thoroughly by running 15 laps every morning.

Japan’s coach is Vahid Halilhodzic, who led Algeria in the World Cup last year and beat Korea 4-2. For you, it will be the first time playing against Japan.

I think the players all want revenge. I was moved by Park Ji-sung when he scored a goal at Saitama Stadium against Japan in May 2010 and showed his “taking a walk” goal celebration. If I score a goal against Japan, I want to do that same thing before I give a military salute.

You already saluted after your goal in the Asian Cup this year.

Actually, before the Asian Cup, I’d already done that, after scoring a goal against Saudi Arabia in a friendly match. But I was criticized for bending my thumb a little bit instead of stretching it. After hearing that, I practiced the salute and asked Jang Hyun-soo to watch my form. That’s why I made a good salute at the Asian Cup in a match against Australia. After the tournament, I received a handwritten letter from the Army chief of staff thanking me for raising the military’s honor.

You made your professional debut with Busan in 2013 but were an unknown player for a long time.

When I was in my second year at Dongnae High School, we lost 5-0 to Gwangyang Jecheol High School, where players like Ji Dong-won were playing. I cried and said to my coach that I should quit football because there were so many better players than me. After turning pro, I was even called a “defensive striker.” Last December when I first got a call to the national team, I went to the airport in my military uniform. Cha Du-ri later confessed that he thought I was a soldier who wanted to get autographs of the players.

But now you’re even called the “Crown Prince of Stielike.”

Just before the Asian Cup, the coach supported me by saying that I wasn’t a spare member; I was picked because I was really wanted. He called me “soldado” [“soldier” in Spanish] and said he would take the responsibility for my performance. In my first Asian Cup match, I was so nervous that all 22 players on the pitch seemed to be wearing the same uniform. Back then, I just played with a do-or-die spirit, but now I have to show that I’ve developed.

What has changed since the Asian Cup?

Some fans recognize me now when I’m walking on the street. Honestly, I was a little hyped after the Asian Cup, but I stabilized my mind by staying in my room alone. It took me two weeks to wake up from that “Cinderella dream.” Since there was nothing but mountains around the Korea Armed Forces Athletic Corps camp, I had nothing to do but concentrate on football. After experiencing the national team play, I can now keep my composure and understand my teammates’ movements better.

You are on a roll after changing your name.

Until December 2013, my name was Lee Jeong-ki. One day, my mother visited this naming center and she was told that if I changed my name from Jeong-ki to Jeong-hyeop, I would be stronger. But actually, after changing my name, I struggled for six months. And after the Asian Cup, I heard that the naming center was really popular. Even the parents of my friend’s girlfriend are asking where it’s located (laughs).

Your No. 18 is the trademark number of striker Hwang Sun-hong.

In the 2002 FIFA World Cup, I watched the match between Korea and Poland in Busan. Hwang was already a veteran back then, but he didn’t spare himself physically in the game. In the match against the United States, he was bleeding from the head but kept playing after putting a bandage on his head. I’m also working hard to play like Hwang, who always puts the team first. Whoever plays in the match, I hope we will be one team and win the East Asian Cup.

It seems that your football career has not yet fully bloomed.

My father is a sailor and my mother worked in restaurants. My sister gave up studying art because of me. Recently, I saw a comment from a netizen who said, “Just like Lee Jeong-hyeop, I don’t want to give up and will pursue my career, putting my best effort forward.” I feel that putting in hard work every day and thinking about my family isn’t in vain. When I heard my nickname ‘Gunderella,’ it seemed that I should be forever a soldier. Even after I finish my military duty on Oct. 12, I want to keep that nickname to remind me of my first break.