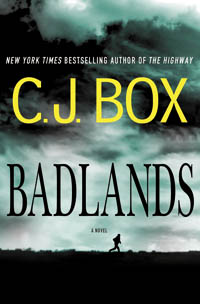 The new Wild West - a hamlet that becomes a boomtown because of its oil-rich fields - makes a sturdy background for C.J. Box’s intriguing new stand-alone novel.

Taking another break from his best-selling series about Wyoming game warden Joe Pickett, Box delivers an enthralling thriller in “Badlands,” the story of a once-quiet area unprepared for its rapid growth.

Cassandra “Cassie” Dewell, last seen in Box’s terrifying “The Highway,” arrives in this new frontier anxious to start as chief investigator for Jon Kirkbride, sheriff of Bakken County. But the progress that assures Cassie her new high-paying job comes with problems.

A few years ago, Grimstad was an economically depressed North Dakota town. But a burgeoning oil industry has brought in a few thousand workers, who have too much money and idle time on their hands. Grimstad’s unbridled population growth also means that crime and the drug trade are out of control.

As Cassie looks into murders related to rival gangs and corruption within the sheriff’s department, 12-year-old Kyle Westergaard unwittingly finds himself in the middle of the drug war after he discovers a duffel bag filled with drugs and money. Kyle, a special-needs child who lives with his alcoholic mother and her low-life boyfriend, finds the bag after he witnesses a fatal car accident on his early morning newspaper route.

Box deftly shows an area under siege by progress, where the prairie now “roared” with trains and tankers. The author’s strength in creating well-rounded characters shaped by their environs and their own moral codes again shines in “Badlands.” AP