Korean SMEs wooed by promise of support, money in China

Korean SMEs wooed by promise of support, money in China 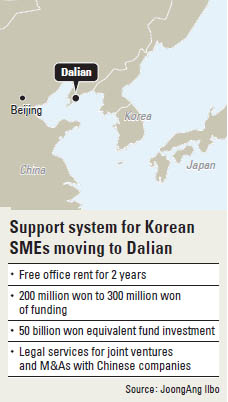 Korean companies are finding all sorts of reasons to leave the peninsula for the greener pastures of Dalian, a city in eastern China.

One such company is Sunjin Entertainment, which created the 2012 Korean sitcom “I Need a Fairy.”

The president of the Korean entertainment company, Lee Yun-kyung, has recently been staying at the Hi-Tech Park in Dalian. She is casting actors for a new web series, “Everyday New Face,” which the company is producing with Chinese Internet company Tencent.

The project influenced her decision to open an office in China, but she was also drawn by the promise of rent-free real estate and Internet access, as long as she chipped in for maintenance fees. She is also eligible for free legal advice.

A Korean software vendor, Metamining, will also expand into Dalian. CEO Lee Jin-seok said he believed the move could help solve two of his biggest challenges in running a business - attracting investors and marketing.

“The Dalian zone has all the conditions that foreign companies need to settle and grow,” Lee said.

According to a recent study by the Social Venture Forum, there are currently 50 Korean small and midsize businesses in Dalian.

This is the first time Korean companies have moved to a single Chinese city in such numbers.

The idea of relocating came from the Social Venture Forum, which was founded by a group of Korean start-ups in 2011. The companies were looking at ways to enter the Chinese market, and their interests have recently matched those of the local government in Dalian, which wanted to attract more foreign technology companies.

The group helped create a high-tech zone the size of Seoul, located only 30 minutes from the Dalian airport.

“Starting this month, 50 Korean small and midsize companies will be moving into the high tech zone in Dalian,” said Park Byung-hyung, chairman of the Social Venture Forum.

“This is the first time that the private sector on its own has succeeded in attracting companies to jointly move overseas.”

Sunjin Entertainment’s Lee has high hopes. She said if she had tried to take her business to another country overseas, there would have been a higher chance of failure - or she might have given up entirely due to the difficulty.

“But with guidance from the Social Venture Forum ... if I do my best, I believe there will be good results,” Lee said.

Korean companies interested in moving to the city have received financial support from the Dalian government to make the transition possible.

A joint Korea-China fund of 50 billion won ($42.9 million) will give financial support to Korean companies moving into the zone.

Companies with advanced technologies are eligible for additional funding of 200 million to 300 million won.

Companies moving into a building provided by the city will be exempt from paying rent for two years. They will pay only a quarter of the commercial rate in their third year and will be given free Internet service.

“We plan on increasing the number of Korean SMEs to 100 by the end of this year and foster them as rising startups in China and Korea,” Chairman Park said.

There will also be support for companies that wish to go public in China or are looking for joint investments, mergers or acquisitions.

“It has become necessary for Korean SMEs to advance into the Chinese market,” said Kim Dong-sun, former head of the Small and Medium Business Administration.

“This project aims to create a successful model that could lead to a free trade pact with China.”