Champ says family was a key

Champ says family was a key 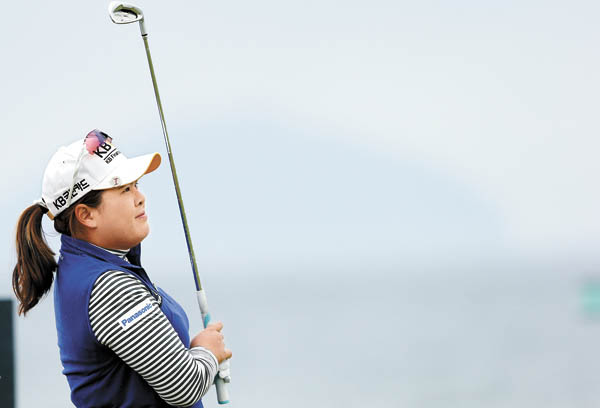 TURNBERRY, Scotland - After winning the U.S. Women’s Open in 2008, Park In-bee fell into a slump the following year, and told her father that she should quit golf and get a job.

Her father usually supported her decisions but objected to that one, and both Park and her father persisted through another three years of middling performance on the course.

If she had given up the sport that day, a bit of golfing history would never have been written.

Park became the seventh golfer to complete a career Grand Slam on the LPGA Tour after she won the Ricoh British Women’s Open on Sunday at the Turnberry course in Scotland. Although golf is an individual sport, Park says the feat was a collective effort. 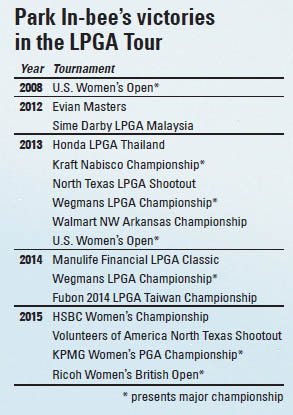 Citing her husband, her parents and her caddie Brad Beecher, who has been with the 27-year-old golfer since 2007, Park says her achievement was a family effort. Before she started her final round here, Park said she had called her grandfather, hospitalized with stomach cancer, and drew on his energy.

“Grandfather always puts me in good spirits,” she said in an interview with the JoongAng Ilbo, an affiliate of the Korea JoongAng Daily.

Just as her golf career started with family, her triumph here also ended with family. After accepting her trophy to complete the slam, Park had a dinner of Korean dishes with her family around her.

Q. How do you feel about accomplishing a career Grand Slam?

A. I don’t know how to express my feelings right now. I have achieved something that I dreamed of. My lower back wasn’t good and I had no good shots, but the reason why this happened is because I came to the course without feeling lots of pressure.

For the last two years, you failed to win the British Women’s Open when the career slam was just around the corner. Did that past experience help?

I had a thought I would someday win the trophy if I kept knocking. Last year, I was close to winning but slipped at the end. But now I’m happy that I don’t have to think about last year’s disappointment.

Is this the happiest moment of your life?

I was really happy when I won the KPMG Women’s PGA Championship in June to win one major tournament three years in a row, but achieving a career Grand Slam is better. Something that was difficult and far away became a reality - I don’t know if this is really a dream or reality. But after I did it now, I also have the thought, “Was it really this difficult after what I’ve been going through?”

What is the biggest power behind you in achieving the slam?

There are many. My husband and parents were big contributors, and I received good treatment from my physical therapist to improve my condition. There are many other things, but all of this wasn’t accomplished on my own. For today, I had the best putting sense in the past two or three years. I mean really, when I hit the ball with the putter head, it just went into the hole.

What does family mean to you?

For anyone, family is important. Without a family, it is meaningless even if you are the best in golf. If I were asked to exchange my golf career for my family, I wouldn’t do it. My family is my life and gives me power. Without my family, there would be no reason to live.

Which was the most difficult moment for you?

When I had no trophies from late 2008 to 2011, there were times I really wanted to quit playing golf. I thought I should do other things. Back then, I didn’t know what to do with my swing, but I overcame the moment when I wanted to quit.

Why didn’t you give up?

In golf, when you are ready to give up because your game isn’t going well, a birdie is suddenly on your card. It’s a sport that has this spell that makes you unable to give it up. That’s not only true in golf, but also in living your life. I think everyone, not only me, knows that if you overcome difficult times, there will be sunshine in the end. Of course, it’s not going to be easy to live in difficult moments, but if you have some composure to enjoy the times you live in and have a modest attitude in your mind, I think you can win over that difficult situation more easily.

Many golfers are challenged in this event because of the rainy and windy weather.

The British Women’s Open is the event that gives you difficult moments that make you want to give up, but it’s also an event that tests you to overcome those situations. I knew difficult situations would come to me, so before entering this event, my goal was to not give up until the end. There were times when I was far behind the leader, but I didn’t give up and finally made it to where I am right now.

Now that you have achieved a career Grand Slam, what’s your next goal?

I thought the slam would be my final goal, and I thought it would not be easy to accomplish that feat. I was looking at two or three years more to finally do it, but it came earlier than I thought it would. I haven’t thought about what exactly I should go for, and I should be searching for a new goal. There are many legendary players ahead to follow. I will think carefully about what I should do, but for now, I just want to enjoy this moment.