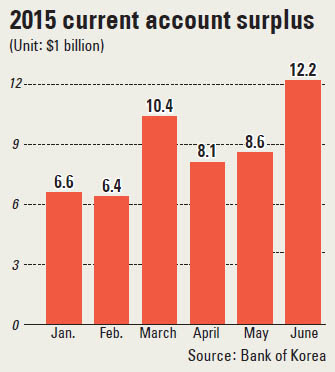 The excess in the broadest measure of trade was $12.2 billion in June, the 39th monthly surplus, according to the central bank. This also makes the first half’s current account surplus $52.3 billion, up 33 percent year-on-year.

Details showed that exports of goods in June totaled $49.3 billon and imports $36.1 billion, down 2 percent and 17.3 percent year-on-year, respectively.

The value of crude oil imports fell nearly 41 percent to $28.7 billion during first six months of this year, compared with $48.4 billion during the first half of 2014.

“Low energy prices have helped imports see a double-digit percentage fall, and this in turn has helped increase the surplus,” said Hwang Sang-pil, the central bank official in charge of major economic statistics.

The service account declined as the outbreak of Middle East respiratory syndrome (MERS) dealt blows to tourism and other related industries. The account showed a deficit of $2.5 billion, ballooning from the previous month’s $400 million.

Primary income was in surplus of $1.68 billion thanks to a rise in dividend incomes. This is also up from the $290 million recorded in May.

In financial accounts, there was an outflow of $10.5 billion from the previous month’s $8.8 billion, making the total outflow for first half $54.2 billion.

After the report, the won gained for the first time in three days, advancing 0.4 percent to close at 1,165.90 a dollar in Seoul. It had gained as much as 0.7 percent during earlier trade.

A gauge of the dollar fell Friday after a report showed U.S. workers’ pay rose at the slowest pace on record, which casts doubt on whether the Federal Reserve will raise interest rates as early as September.

The greenback’s 14-day relative strength index versus the won was at 70 on Friday, a level that signals it may have climbed too rapidly, too soon. The level was at 65.4 on Monday. National Australia Bank recommended closing long dollar six-month positions against the won at 1,167.6.

Exports from Korea declined 3.3 percent in July from a year earlier, while imports fell 15.3 percent, according to data from the Trade Ministry on Saturday.

The nation’s current account will continue to be in surplus for some time, BOK Director Park Seung-hwan, told reporters.

The three-year yield was unchanged at 1.77 percent.