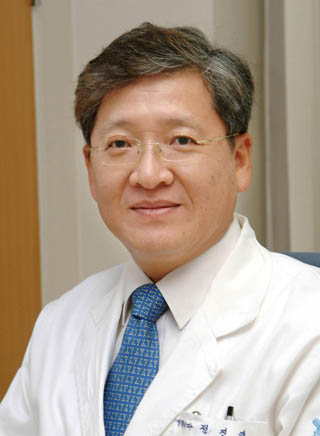 President Park Geun-hye on Tuesday appointed Professor Chung Chin-youb of Seoul National University Bundang Hospital as the new leader of the Ministry of Health and Welfare, which came under fire in May for its poor response to the outbreak here of Middle East respiratory syndrome (MERS).

Blue House Spokesman Min Kyung-wook said during a press briefing that Park had selected the veteran surgeon “for his in-depth knowledge of the country’s overall medical system,” noting that his skills as a doctor would help contribute to the medical industry and public health.

Chung’s appointment as health and welfare minister follows criticism over the agency’s failure to prevent the spread of the virus in its initial stages. Since May, MERS has killed 36 patients.

No additional cases had been reported for 30 consecutive days as of Tuesday, and the government last month declared the outbreak essentially over.

Much of the criticism against the ministry was focused on departing Minister Moon Hyung-pyo, who many observers said failed to respond in time to the outbreak and lacked necessary medical expertise.

Moon does not have a medical background and is a specialist in welfare policy.

President Park’s objective for the incoming minister to restore the ministry’s image was reflected in Min’s briefing, in which he noted that Chung had helped to establish a top-rate medical system at Seoul National University Bundang Hospital during his 25-year career.

Chung is set to undergo a parliamentary confirmation hearing as a ministerial nominee, though Assembly approval is not required for his appointment.

Kim, a former professor, served on the ruling party committee responsible for reforming the debt-ridden pension system for civil public servants and was integral in helping to reach an agreement with the opposition party in the overhaul.

“Kim has in-depth expertise in employment, welfare and policies for women from her experience as a lawmaker, an economics professor at Soongsil University and a researcher at the Korea Institute for Public Finance,” Min said during the briefing.

He added that President Park would issue a statement to the nation on Thursday to lay out her blueprint for the management of national affairs in the second half of the year.

It is expected that she will urge the National Assembly to legislate a package of labor reform bills in an effort to revive Korea’s sluggish economy.

Park has now completed half her term, and her approval rating currently hovers around the 30 percent range.