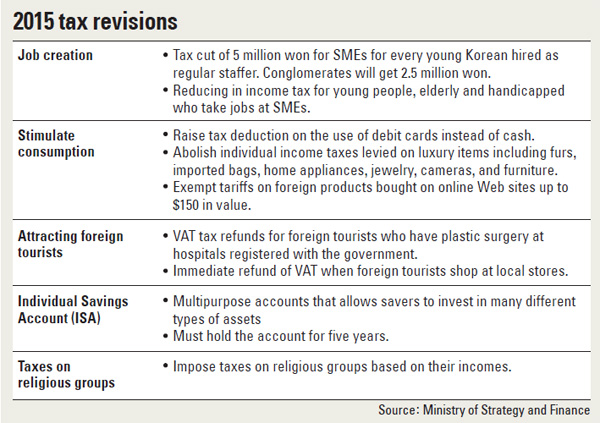 The government announced a set of revisions to the tax laws, offering breaks to spur domestic consumption, increase hiring of young people and encourage foreign tourists to spend money.

Foreign tourists will get a small discount on cosmetic surgery done in Korea.

With the revision, the government expects annual tax revenue to rise by about 1.08 trillion won ($924.77 million).

For a small or mid-sized enterprise that hires a young Korean as a salaried staffer, the government will offer a 5 million won tax cut per new employee for three years. The cut for conglomerates will be 2.5 million won per new hire.

To encourage young Koreans to work for SMEs, their income taxes will be reduced for three years.

An employee between the ages of 15 and 29 with an annual salary of 25 million won will save about 500,000 won over three years.

“What we focused on in the tax revision plan was stimulating the economy,” said Joo Hyung-hwan, the first vice finance minister, at an embargoed briefing on Monday prior to the announcement.

The government also announced a new way to define SMEs.

To stimulate domestic consumption, more tax deductions will be given for use of debit cards rather than cash.

From April 2017 to March 2017, tourists who get plastic surgery done at a hospital registered with the government can get a refund of 10 percent of the value added tax. Foreigners have to pay VAT on cosmetic surgery.

Foreigners who purchase products at Korean stores can also be immediately refunded VAT at the stores. Under the previous law, tourists had to visit counters at international airports for refunds and go through various procedures.

The Finance Ministry said the government will set a limit on which products are eligible for refunds, though the exact list has not been fixed yet.

Consumption of some expensive items will be encouraged by the abolishment or easing of the so-called “individual consumption tax.”

For instance, a 5 to 7 percent tax levied on royal jelly, home appliances that consume large amounts of power and perfumes will be abolished.

A 20 percent tax on items such as jewelry, imported handbags and watches, furs, cameras, large-capacity refrigerators, televisions and perfume, imposed on any amount exceeding 2 million won, will now be imposed on amounts exceeding 5 million won.

If the retail prices of those products do not exceed 5 million won, the tax will not be levied.

For financial markets, some tax exemptions will be offered on investments in funds that have 60 percent of their investments in overseas stocks as part of an effort to stimulate overseas investments.

But the maximum amount of money invested in each fund will be limited to 30 million won.

So-called Individual Savings Accounts (ISA) will also be launched, a multipurpose account that allows savers to invest in many different types of assets. The account holder has to maintain the account for five years and tax will be exempted on earnings of up to 2 million won. Over that, the tax will be nine percent.

The Finance Ministry also pledged to increase income taxes on religious groups and clergy, which no government has managed to do in the past due to protests from the powerful religious groups.

The current tax law levies income taxes on 20 percent of the annual income of a priest or monk, considering the remaining 80 percent as “necessary expenses.”

The Finance Ministry is attempting to reduce the exempted ratio of the “necessary expenses” and impose income taxes proportionally on the total income of a member of the clergy.

In 2014, the ministry tried a similar change, but the clergy said they were not “laborers” and the money they received from churches as living expenses was not “income.”

Economic analysts were skeptical of whether the moves would do much to stimulate the economy.

“The revisions are likely to have a limited effect, except for the decision to start collecting taxes from religious groups,” said Kim Sun-taek, president of the Korea Taxpayers Association. “The changes won’t help resolve the nation’s chronic problems like income inequality and weak enforcement of tax codes on property income.”

“If the additional tax to be collected from [religious groups and some small businesses] still can’t make up the tax deficit,” said Lee Jun-hyup, a senior researcher at Hyundai Research Institute, “the government will have to raise income taxes and corporate taxes from the rich and conglomerates after reaching a social consensus.”

Kim Doo-un, an analyst at Hana Daetoo Securities, said the revisions are expected to direct investments to the small-cap Kosdaq, which consists of companies with strong domestic business.

“I expect the revisions will have little impact on the Kospi market, but rather on the Kosdaq,” he said. “The tax breaks on overseas investment funds will also be effective.”

“There’s nothing bad in the plan, but it is not a strong factor to encourage us to rapidly increase jobs,” a spokesman for a local distribution company told the JoongAng Ilbo, an affiliate of the Korea JoongAng Daily. “The government should create an atmosphere for corporations to invest and hire people.”