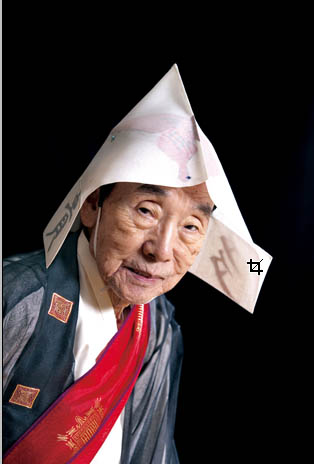 Lee Mae-bang, one of Korea’s most respected traditional dancers, died on Friday of natural causes, his family said. He was 88.

His daughter, Lee Hyeon-ju, said her father’s death was unexpected.

“He traveled to Mokpo last week and was also preparing for a performance in December,” she told Yonhap News Agency.

Born in 1927 in Mokpo, South Jeolla, Lee joined Gwonbeon - a school that trained artists and taught dance, poetry and art - at just seven years old at the recommendation of one of the institute’s members.

Gwonbeon was originally launched by gisaeng, professional female entertainers of the Joseon Dynasty (1392-1910) who danced and recited poetry for wealthy male patrons and the court.

Lee became renowned for his talent after doing a seungmu dance at a performance of Lim Bang-wool, a maestro of pansori (traditional narrative singing) at age 15. Aside from being a rare male traditional dancer, his techniques and charms have made him incomparable.

In the 1980s, Lee worked to spread the beauty of traditional Korean art abroad, performing in countries like the United States and France. In 1988, he was awarded France’s Medal for Arts and Culture.

“He is the dancer of our era,” Seong Ki-suk, a dance critic and professor at the Korea National University of Arts, told Newsis.

Lee is survived by his wife, Kim Myeong-ja, and daughter Lee Hyeon-ju. His funeral service is scheduled to take place on Monday.