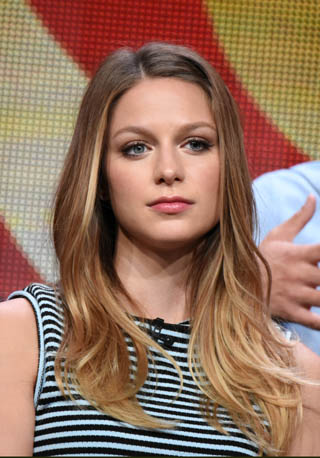 BEVERLY HILLS, California - The producers of “Supergirl’’ say Melissa Benoist was the first actress they saw for the role of Kara Zor-El, the caped cousin of Superman.

Executive producer Greg Berlanti describes her portrayal as “the most evocative since Christopher Reeves,’’ who played Superman.

Benoist and Berlanti, along with Calista Flockhart, Jeremy Jordan and other cast members and producers of the CBS series, spoke about the show at a panel discussion Monday at the Television Critics Association summer meeting.

Superman’s presence will be felt in “Supergirl,’’ but he won’t be seen.

“You won’t see him exactly on-screen. You will see him in the background, but he does play a part in her evolution of becoming a superhero.’’

The idea of a crossover among characters from Greg Berlanti’s other superhero CW shows, “Arrow,’’ “The Flash’’ and the upcoming “Legends of Tomorrow,’’ came up almost immediately when “Supergirl’’ was announced by CBS.

That’s not in the cards at this point.

“We have obviously to make the shows really stand on their own,’’ said Berlanti. “I always approach these things as a fan myself and I always love when there’s a bigger universe at work, but at the same time these shows really have to function on their own.’’ AP