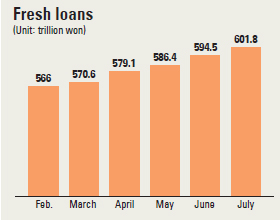 Household debt in Korea has surpassed the 600 trillion won ($512 billion) level for the first time, despite the government’s bid to curb borrowing.

Small private entrepreneurs, such as restaurateurs, account for the largest monthly new borrowing since data was compiled a decade ago.

According to the Bank of Korea on Wednesday, as of July households borrowed a total of 601.9 trillion won from banks, including 7.4 trillion won in fresh loans.

Most of the borrowing largely involved mortgages, which accounted for 74 percent of all household borrowing from banks. 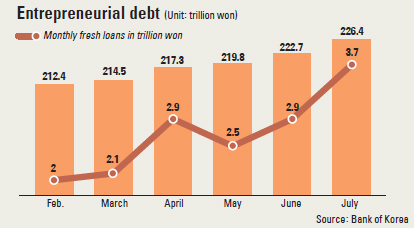 The central bank said the increase in household loans was due, in part, to the revitalization of the property market caused by deregulation and the lowered policy rate that the government has been pushing since the second half of last year.

“The low interest rate and the increase in housing transactions have helped increase mortgages more than a year ago,” said Yoon Dae-hyun, a BOK official. “Additionally … larger spending during the summer vacation also contributed to higher lending.”

The Korean government has been trying to boost the property market, which has been frozen since the global financial crisis of late 2008. To spur business, it made a bold move to lift two major property loan restrictions: the loan-to-value ratio and the debt-to-income ratio.

But the market didn’t respond strongly until the central bank started to lower the key policy rate in August, last year.

The property market, however, gained full momentum in April, a month after the BOK unexpectedly lowered the key borrowing rate to the 1 percent range for the first time.

In March, fresh mortgage loans reached 4.8 trillion won. But in April it shot up to 8 trillion won. The additional rate cut brought down the policy rate to a record low of 1.5 percent in June as a countermeasure to the worsening economic growth caused by the outbreak of Middle East respiratory syndrome.

According to the Ministry of Land, Infrastructure and Transport, housing transactions last month surged 43.2 percent from a year ago to 110,675 cases. The accumulated number of houses sold between January and July grew 31 percent.

“Since March as there have been growing expectations of the property market, and housing transactions have been over 10,000 every month,” said a Land Ministry official.

So far this year private entrepreneurs have borrowed 17 trillion won in the first seven months.

Loans borrowed by small and midsize companies also grew last month while those of conglomerates shrunk.