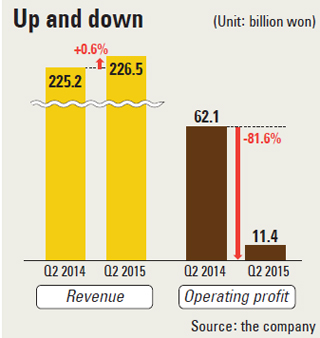 The company, born in October last year from a merger between the country’s second-largest portal site operator Daum Communications and Kakao, which manages the nation’s most popular mobile messenger KakaoTalk, said it spent 19.7 billion on advertising during the April-June period to market KakaoTaxi, KakaoPay and other services.

Revenue for the same period stood at 226.5 billion won, edging up 0.6 percent from a year earlier.

Revenue from advertising platforms, which contributed 66.6 percent to the total revenue, showed a 2.2 percent year-on-year growth to hit 150.7 billion won. But earnings from its game platform decreased 13.7 percent over the same period to 54 billion won, due to increased competition in the mobile game market.

Popular mobile games like Raven are increasingly opting to launch independently on app stores, rather than through KakaoTalk.

Despite the worse-than-expected performance, the company with the second-largest market cap on the secondary Kosdaq (8.4 trillion won), saw its shares surge 3.9 percent to close at 140,100 won on Thursday. The jump came after the company’s co-CEO rolled out upbeat long-term business plans.

Choi Sae-hoon, one of two CEOs set to leave the company in late September, said during a conference call Thursday morning that the company will secure an additional stake in the consortium it plans to form with Korea Investment Holdings to establish the nation’s first web-based bank, tentatively named Kakao Bank.

That additional stake will eventually make Daum Kakao a top shareholder in the entity.

A few hours later, the company announced Kookmin Bank, the nation’s No. 1 bank, will also join the consortium. Kookmin Bank has the largest number of mobile banking users.

Daum Kakao had been expected to control a mere 10 percent stake, the ceiling for what a non-financial company can own of a new bank according to Korean law.

Korea Investment was seen to assume a 50 percent and the remaining 40 percent was undecided at the time.

Daum Kakao becoming a top shareholder will be possible when the banking law is revised, Choi added.

Financial authorities aim to pass a bill raising the shareholder ceiling from the current 10 percent to 50 percent in September.