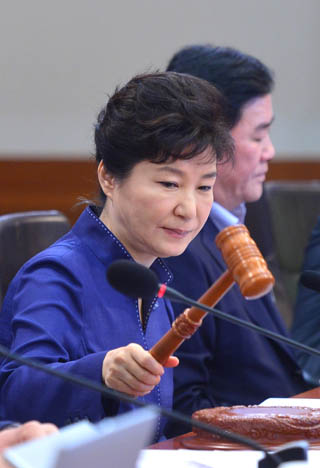 To mark the 70th anniversary of Liberation Day tomorrow, the government Thursday announced a list of 6,422 criminals granted presidential pardons as of today.

The number of pardons for businessmen, which President Park Geun-hye said earlier this month would be done for the sake of the economy, was kept to a minimum of 14.

Park convened an extra Cabinet meeting at the Blue House on Thursday morning to finalize her decision on the presidential pardons.

“This year is a significant year, since it is the 70th anniversary of Liberation Day,” Park said in remarks. “Pardons thus far have been granted to a limited number of people to reflect public sentiment.

“But this time, in commemoration of the 70th anniversary of liberation, we’ve decided on special pardons [for businessmen] for the sake of national unity and stimulation of the domestic economy.”

Park has avoided pardons for convicted businessmen because they are unpopular with the public.

“I wish the pardons will be a stepping stone for another 70 years of successful history of the country by bringing people together.”

Among chaebol heads, only SK Group Chairman Chey Tae-won, who served two years and seven months of a four-year prison term for embezzlement and corporate malpractices, was included.

His brother Chey Jae-won, senior vice chairman of SK Group, jailed for two years and four months of a three and a half-year prison sentence for similar crimes, was not pardoned.

No politicians were included.

The Ministry of Justice explained that businessmen who were convicted in the past six months, committed irregularities under the incumbent government, did not pay fines or received earlier presidential pardons in the past five years were excluded.

The ministry also took into consideration how serious the crimes were and whether the businessmen could contribute to improving the economy.

The SK Group released a statement later on Thursday welcoming the pardon of its chairman.

“Regarding the decision, the SK Group and its executives and staff members convey our deepest appreciation to the government and the public,” it read. “We will put our every effort into the country’s development and revitalization of the economy, and we will do our best to be the company beloved by all.”

The Federation of Korean Industries (FKI) also made a comment.

“Despite the difficult economic situation, the financial circles will try to boost the economy again by stimulating investments and creating jobs for the youth,” the FKI said.

“We will take the presidential pardons as an opportunity to work harder to be trusted by the public.”

The ruling Saenuri Party welcomed the announcement and asked for the pardoned to contribute to the country.

“We take the presidential pardons as a conclusion the president reached after long consideration to bring people together and stimulate the economy while maintaining law and order,” said Kim Young-woo, senior spokesman for the Saenuri Party.