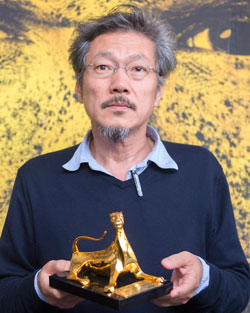 Korean film director Hong Sang-soo poses during a photo call with the “Pardo d’Oro” (Golden Leopard) award he received for his movie “Right Now, Wrong Then” during the 68th Locarno International Film Festival in Locarno, Switzerland, on Saturday. [AP/NEWSIS]

It won the Golden Leopard award, the top honor at the festival’s international competition section, while the film’s lead actor, Jung Jae-young, won the Best Actor award, according to the film’s international distributor, Fine Cut, on Saturday.

This is Hong’s second time winning an award at the prestigious film festival that takes place in Switzerland, since he won the Leopard for Best Direction with “Our Sunhi” in 2013.

Hong was the second Korean director to be honored with the top prize after Bae Yong-kyun for “Why Has Bodhi-Dharma Left for the East?” in 1989.

In the film, Ham is a film director who travels to the outskirts of Seoul to give lectures, while Yoon is a local painter who willingly shows Ham around her atelier and paintings.

After their long conversation while drinking soju, a scene frequently shown in Hong’s previous films, Yoon feels a sort of disappointment toward the filmmaker after hearing that he has been married before.

Playing with time loop, a narrative device that Hong likes to deploy, the latter part of the film again shows their tipsy night recurring, with only slight details changed from the version seen earlier in the film. However, the result of each stands in stark contrast to the other.

The duality depicted in the film, which Hong describes as “giving a person two concrete realities,” is the way one “can think about life more directly, more basically,” according to an interview he did for the festival.

“Comparing these two methods represents a different process, just giving a person two concrete realities, two worlds one is forced to compare. ... We spend all our lives searching for our ideals. It’s a very long process, and sometimes I realize that maybe that’s not the way to look at life,” he explained.

Meanwhile, actor Jung’s triumph at the Locarno International Film Festival indicates another meaningful step for Korea’s film industry because it was the first time for a Korean male actor to be awarded with the Best Actor prize.

It was 45-year-old Jung’s second time collaborating with Hong after starring in “Our Sunhi.”

The exact release date has not been confirmed yet.