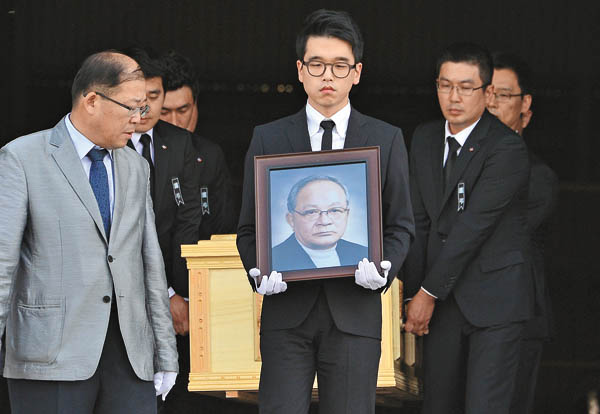 Lee Sun-ho, grandson of the late Lee Maeng-hee and only son of CJ Group Chairman Lee Jae-hyun, carries his grandfather’s portrait with the casket following behind him at the cargo terminal of Gimpo International Airport, in southwestern Seoul, on Monday. [NEWSIS]

The body of the late Lee Maeng-hee, eldest son of Samsung founder Lee Byung-chul and the father of CJ Group Chairman Lee Jae-hyun, was returned to Seoul on Monday.

The funeral parlor at Seoul National University Hospital in Hyehwa-dong, central Seoul, will be open to visitors from today, CJ Group announced on Monday. Visitors will be accepted for the next three days before Lee is buried on Thursday near Yeoju, Gyeonggi.

The late Maeng-hee died in a hospital in Beijing on Friday. He was diagnosed with lung cancer in December 2012.

His body arrived at Gimpo International Airport at 3 p.m. on Korean Air flight KE2852. The body was then transferred to the funeral parlor after going through a quarantine process at the airport.

Lee Jae-hwan, chairman of JS Communications and younger son, and Sohn Kyung-shik, CJ Group chairman and brother-in-law of Maeng-hee, traveled to Beijing last week to retrieve the body. On arrival, Sohn told reporters that the medical staff in China tried cardiopulmonary resuscitation (CPR) when Maeng-hee lost consciousness on Friday morning but it failed to bring him back.

“He seemed to have died without any pain,” Sohn said.

Lee was dubbed the ill-fated prince of Samsung Group as he was passed over by his father to succeed the family business. Control of Korea’s biggest conglomerate was handed to his younger brother, Lee Kun-hee.

Second-oldest son Chang-hi, former chairman of Saehan Media, passed away at age 58 in 1991. Kun-hee, youngest son and the chairman of Samsung Group, has been hospitalized since suffering a stroke last May. The estranged brothers never reconciled.