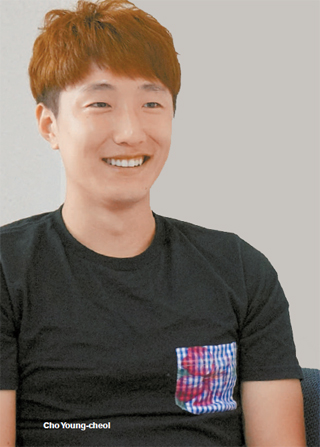 At the Asian Cup this January, Cho Young-cheol scored the only goal in Korea’s victory against Oman. But that was probably his best performance in a national uniform.

Although Korea finished runner-up in the Asian Cup, coach Uli Stielike said after the tournament that players based in Middle East teams were not playing as well as expected. Cho was then playing for Qatar SC.

Cho hasn’t been called by the national team since the Asian Cup. Hoping to reverse the tide, the 26-year-old forward decided to play on home turf, signing with Ulsan Hyundai FC in the K-League Classic.

Cho has never played in Korea as a pro. After graduating from Haksung High School in 2007, he has played with Japanese clubs Yokohama FC, Albirex Niigata and Omiya Ardija before moving to Qatar SC last year.

Cho has yet to impress in the K-League. In his first K-League match against FC Seoul last Tuesday, he saw his team losing 1-2, and he didn’t play in the last two matches against Busan I-Park and the Pohang Steelers. Ulsan’s next match is against the Suwon Samsung Bluewings on Saturday.

In an interview with Ilgan Sports, an affiliate of the Korea JoongAng Daily, last Thursday, Cho said he is gearing up to impress in front of local fans and is hoping to wear the Taegeuk Warriors uniform again.

Q. What do you think about national team coach Uli Stielike’s comment on players in the Middle East?

You weren’t selected into the national team after the Asian Cup. What happened?

I didn’t do well in the Asian Cup, and even after the event, I didn’t produce good results in the league. Since the coach didn’t come to the Middle East to see the match directly, the only way that I can appeal to him is to produce results. Since there is a limit to my performance, I thought I would not be able to prove myself on the national team.

Did Stielike’s comment influence your decision to come to the
K-League?

What kind of performance do you need to impress Stielike?

I need to show what I’m good at. With dribble penetration and threatening defenders around the penalty box, I want to impress the coach. But what’s important is scoring a goal. If I’m not getting a goal, I want to contribute much in goal scoring situations. I want to gear up my condition and football sense quickly.

Do you think it is good for you to be able to play in various positions?

I can play almost all kinds of attacking positions. Personally, I think this is my advantage. When the team has an injured player, I can replace them easily. I can also help change game rhythm by changing position. Being a multi [position] player is a great advantage.

You are experiencing the K-League for the first time. How do you feel?

When I was overseas, I watched a lot of K-League matches. When I’m in Korea for vacation, I always watch at least one K-League match. I always wanted to play here and I have information about the league.

What made you play for Ulsan?

Ulsan is my birthplace. I was an Ulsan fan from childhood and I visit this city when I’m on vacation. My family also lives here, so I can see them often. In a match against Seoul, my family was at the stadium, and my father even invited nearly 200 people. When I see my family, I get more energetic and they make me work harder.

What are your thoughts on Ulsan coach Yoon Jung-hwan?

When I was in Japan, I heard a lot about him. I didn’t speak to him personally, but I know his style and what kind of football he wants to play.

He likes a player who rushes energetically on the field and who can make sacrifices for the team. I will play with that in my mind.

How do you rate your K-League debut against Seoul?

The K-League has its own tempo and pressure. I really need to adjust to this league and team tactics quickly, as well as my new role. I will put my best efforts forward to improve my team’s record.

What is your goal playing in the
K-League?