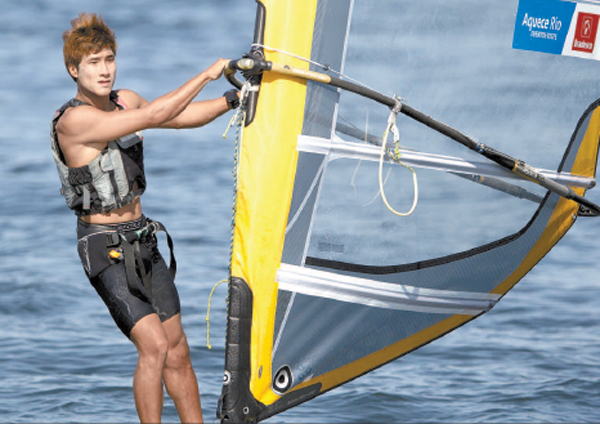 Cho Won-woo sails inshore after competing in the men’s RS:X Windsurfer sailing test event, in Guanabara Bay, Rio de Janeiro, Brazil, Wednesday. He is one of four athletes to have “officially” fallen ill during the Olympic sailing test event.[AP/NEWSIS]

RIO DE JANEIRO - Korean wind surfer Cho Won-woo got his first ride in an ambulance the other day, taken to a Rio de Janeiro hospital with dehydration, vomiting, a headache and dizziness.

Cho is one of four athletes to have “officially” fallen ill so far at the week’s Olympic sailing test event in Rio de Janeiro’s polluted Guanabara Bay. Officials acknowledge the reporting is incomplete, with many teams and some of the 300 athletes skittish about disclosing illnesses.

The 20-year-old Cho on Wednesday was back to “50 to 60 percent” strength and out training, 24 hours after his hospital stay. He said he doesn’t know “the exact reason why I got so sick.”

His coach has fewer doubts.

“Probably it’s from the water,” Danny Ok, Cho’s coach and an exercise physiologist, told The Associated Press on Wednesday. “It’s kind of a sad story.”

Ok described the water as “smelly” and added: “Especially in the bay, it’s terrible. I can’t imagine how they can have racing in this area.”

Much of the focus at the Olympic sailing test event - and one earlier this month for rowing - has been on Rio’s polluted waters. Athletes have little choice but to compete with local organizers - backed by the International Olympic Committee - declining to move to cleaner venues for next year’s first Olympics in South America, which open Aug. 5, 2016.

An independent five-month analysis by The Associated Press published July 30 - with research done by a Brazilian virologist - showed dangerously high levels of viruses from human sewage at all Rio Olympic water venues.

Rio state officials, under pressure from the IOC and ISAF - the world governing body of sailing - are using stop-gap measures to retrieve floating rubbish from the bay, track detritus from helicopters and step up bacteria-only monitoring.

Despite the scrutiny, brown sewage continues to flow into the Marina da Gloria at several points, which has drawn photos and videos from athletes that have been widely viewed on social media.

Ok posted photos on his Facebook page of Cho on a stretcher being lifted into an ambulance. He accompanied them with critical comments.

“It seems he [Cho] got infected from virus somewhere in the racing site which is supposed to be safe and clean as an Olympic venue,” wrote Ok, a three-time Olympic wind surfer. “More than 10 years of life-time effort can be destroyed in one day!”

“IOC and ISAF must consider how the safety issue will be improved for the next year,” he added.

The IOC has declined to endorse testing for viruses, which can cause stomach and respiratory ailments that could knock an athlete out of competition.

Ok acknowledged that maybe he did not protect Cho sufficiently for the polluted conditions.

“Maybe there is a problem for us, not preparing enough,” Ok said.

Dr. Nebojsa Nikolic, the top medical official of the ISAF, said it is difficult to get all sailors to concentrate on basic hygiene: washing hands, showering, getting shots for hepatitis A and typhoid and taking other preventative measures.

“They simply have to do these things,” Nikolic told the AP Wednesday. “This is part of their game, this is part of having sports success.”

Nikolic said he hoped to have more complete data on illnesses after the test event ends Saturday. He said it’s difficult to link illness to the causes and said athletes often take risks.

“[Cho] is a sportsman who got a viral infection,” Nikolic said. “How he got it we still don’t know ... Was it someone sneezing near him? Or was it the water he entered, or the bottle he drank from?”

Cho said he has yet to swim in the bay, and only gets in up to his knees to launch for a race.

Malcolm Page, a two-time Olympic sailing gold medalist who serves as a spokesman for ISAF, said sailors try to ignore the pollution. He said many like the venue and have grown accustomed to the pollution and wind conditions.

“This week, all they care about is racing.” Page said. “This is more important than our world championships.”