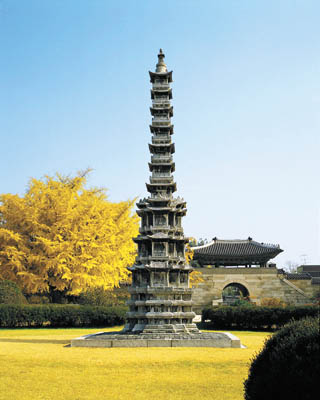 Currently housed in the National Museum of Korea, this stone pagoda once stood at Gyeongcheonsa, a Buddhist temple from early Goryeo (918-1392) located on Mount Buso in Gwangdeok-myeon, Gaepung-gun, Gyeonggi.

The pagoda was smuggled into Japan when Korea was under Japanese colonial rule in the early 20th century but was returned in 1960 and kept in Gyeongbok Palace until it was moved to its current location.

The pagoda consists of a three-tier base and a 10-story body, both of which are lavishly decorated with elaborately carved Buddha and bodhisattva images and floral motifs.

There is an inscription on the body revealing that the pagoda was set up in 1348 when Goryeo was under the rule of King Chungmok (1344-48).

The pagoda has been regarded as a fine example of the foreign style of Goryeo pagodas built in the period as it is, in addition to its unique form, made of marble rather than granite.