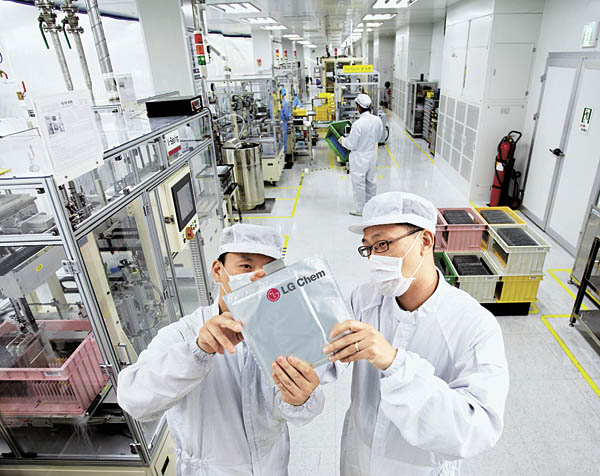 LG’s plan for growth is focused on eco-friendly auto parts and the energy solution business.

LG has been pushing affiliates to develop eco-friendly automotive technologies since the 2000s. As a result, LG now has a wide variety of innovative products in the field, including LG Chem’s electric car batteries, LG Electronics’ in-vehicle infotainment components, LG Innotek’s vehicle sensor system and LG Hausys’ car material components, among others.

At the 2015 Geneva International Motor Show, LG Electronics collaborated with Italdesign of Volkswagen group by providing parts for the “Gia” concept car.

LG Electronics will also be working with Google by supplying battery packs for its self-driving car project.

LG Display is a top supplier of displays and dashboards for car companies, currently third in the market with a market share of 16 percent.

Han Sang-beom, CEO of LG Display, announced last January that the company had secured 80 percent of its total orders from major automobile companies.

LG Innotek is quickly expanding its product lines - already numbering more than 20 - and extending its reach around the globe.

LG Chem is leading the market in electric car battery packs and boosting their production capacities. Last year, the company started operating a factory in Michigan, and another is under construction in Nanjing, China.

LG Chem is capable of providing battery packs for more than 200,000 electric cars a year and serves more than 20 automotive companies in South Korea, America, Europe and China.

LG Hausys produces auto fabric and light weight components and is ranked third in the global auto fabric industry. It has a factory in Tianjin, China, and another under construction in the United States, in Georgia.

LG also puts an emphasis on being eco-friendly and is the only group whose affiliates provide products and services that form a direct chain from green energy generation to storage to efficient use.

Another MOU was signed last November with Germany’s Siemens to supply batteries for future products.