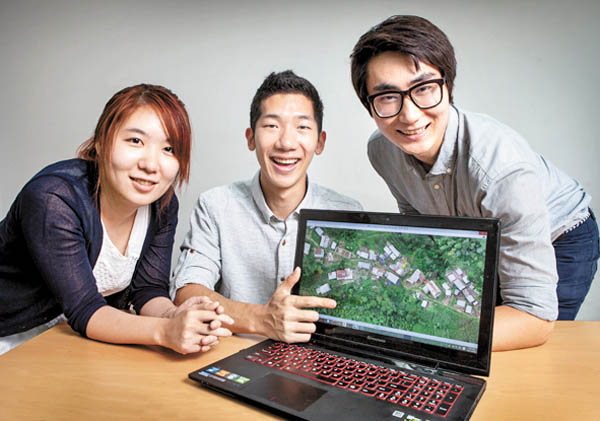 A start-up founded by students has developed a drone to help disaster relief in Nepal after the massive earthquake that killed thousands of people in April. It raised money through crowdfunding

The drone takes photos of damaged villages that need help and transforms the data into three-dimensional maps for nonprofit organizations and local governments.

Angel Swing, founded at a start-up business administration course at Seoul National University (SNU) in March, completed its first mission in Nepal in early August to provide geographical data from a village about 30 minutes away from the country’s capital, Kathmandu. It is the brainchild of Park Won-nyoung, a student at Georgia Institute of Technology currently in an exchange program at SNU, Jeon Suli, a political science major, and Kang Yu-bin, a business administration major.

“We realized that Nepal is still far behind due to its rough geography. It doesn’t have good roads or other transportation infrastructure,” Park told the Korea JoongAng Daily in an interview at the SNU campus. “Cutting-edge technologies like drones are a must in such situations because rescuers can’t grasp information as to how much damage has occurred in villages due to landslides.”

Angel Swing developed a 2.5-meter (8.2-feet) fixed-wing drone that can fly up to 70 kilometers for only 3 million won ($2,250) using open-source technologies and trial-version software available online.

The group raised 3 million won in a week and half on a local crowdfunding website in June. Individuals offered donations as small as 3,000 won and as large as 500,000 won.

In the first week of August, the group traveled to Nepal to test their drones in cooperation with Kathmandu University’s engineering school and its robotics club.

Using two drones - a quadcopter and a fixed-wing drone capable of flying up to five square kilometers (1.9 square miles) - the group compiled two-dimensional geographical data and transformed that data into a 3-D map.

“The photos show every detail of how Nepali are still suffering from the earthquake,” said Park. “People were living in temporary housing built with roofs made of boards and rocks, right beside their destroyed houses.”

The group donated the 3-D map as well as the drones to the college. They also shared their experience of crowdfunding and engineering technologies with the Nepali students.

Angel Swing has recently completed developing another quadcopter designed to carry up to two kilograms (4.4 pounds) of materials. The group aims to bring a prototype to Nepal in October to help supply drugs or food to people in remote regions.

“Even though we finished the development, we’ve been unable to test it, because it is illegal to test shipping drones in Korea,” Park said. “People have to register with the regional aviation authority to fly drones for photos or personal entertainment. Regulations are tough.”

The team hopes to bring 30 drones to Nepal early next year, which would require about 45 million won. The team is already out of funding.

It requested sponsorships from private foundations of major conglomerates like SK Group, Samsung and LG Electronics, but hasn’t gotten any response, which forced them to delay their Nepal plans.

So far, the team has received three domestic orders for drones, Jeon said, but it doesn’t want commercial business to interfere with its Nepal project.

“Making money is important, but we hope to do so in a way that contributes to society,” Kang said.