Agreement may lead to first South-North game in 10 years

Agreement may lead to first South-North game in 10 years 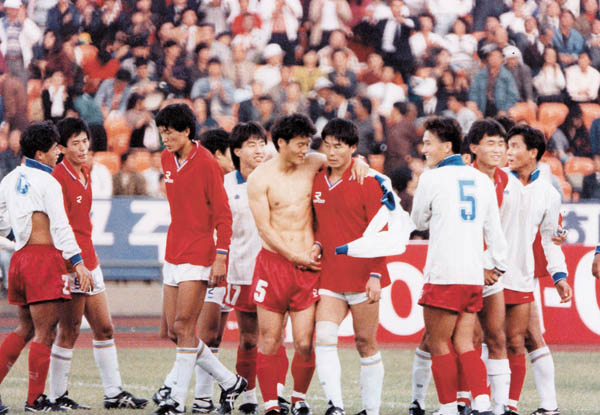 South and North Korean players exchange uniforms after playing in the “unification football match” in Seoul in 1990. [JoongAng Ilbo]

Hopes are rising that South and North Korea may play a friendly football match for the first time in a decade, after the two countries reached an agreement last Tuesday to ease rising tensions on the peninsula.

The KFA is currently waiting for the South Korean government’s approval for Chung’s visit to Pyongyang as a member of the EAFF. The EAFF meeting is normally held in China, but this time, the North Korean capital city decided to host the executive meeting on Sept. 19.

Chung, 53, is expected to have a conversation with his North Korean counterpart, Han Un-gyong, who is also an executive member of the Asian Football Confederation, about re-opening friendly football games between the South and North.

Better known as a “unification football match,” the two sides created the event in 1990, hoping to vitalize communication through sport. The inaugural games were held in October 1990, with one game being played in Seoul and the other in Pyongyang. The two sides later met each other in 2002 and 2005 in Seoul, but the friendly match has not been held since then.

Kim Joo-sung, who is now head of the KFA’s referee management office, says the match cannot happen unless the two Koreas really want to do it.

Kim, three-time Asian Footballer of the Year, has been involved in all the previous unification friendly football matches. In 1990, he was a player in the friendly match, and in 2002 and 2005, he worked as the KFA administrator.

“In 2002 and 2005, both sides had the desire, necessity and justification for exchanging football, and there was also trust between the two sides,” Kim told Ilgan Sports, an affiliate of the Korea JoongAng Daily. “I think it is the same today. Both teams [need a] desire to communicate with each other.”

Kim said the political situation between the two countries was the reason no friendly game had been held in 10 years.

During the 1990s, Kim’s nickname was “Wild Horse” because of his energetic plays and long mane of curly hair.

The midfielder remembers Oct. 11, 1990, in Pyongyang, where some 150,000 spectators packed 5.1 Stadium to see the first unification match.

“All the players and officials couldn’t believe going to North Korea was real,” he said. “We all had nerves and the match was played in a tense situation.”

Kim, who played with the Daewoo Royals [now Busan I’Park] and VfL Bochum in the German Bundesliga, scored South Korea’s only goal in that match, which the South lost 2-1.

He recalled the atmosphere at the stadium was not hostile when he scored.

“Regardless of the result, it was a meaningful match because it was the first sport exchange after the separation,” he said. “I think it initiated the South-North exchange, and I’m proud to be part of it.”

Since then, South Korea men’s football has won every unification match. Twelve days after the match in Pyongyang, the South hosted the North in Seoul and won 1-0, thanks to a goal from Hwang Sun-hong.

In 2002, just before South Korea hosted the Asian Games in Busan, the two teams met again in Seoul. The game ended in a goalless draw. On Aug. 14, 2005, a day before the 60th anniversary of Liberation Day, the South beat the North 3-0 in Seoul.

After 10 years, now marking 70 years of independence from Japan’s 36-year colonial rule of Korea from 1910-45, the timing to revive the friendly match seems right, and the agreement between the two governments also raises hope.

The South Korean government earlier this year reportedly pushed to have the friendly match this year but did not make progress.

“Football can play a big role in developing the South and North’s political peace and unification,” Kim said.