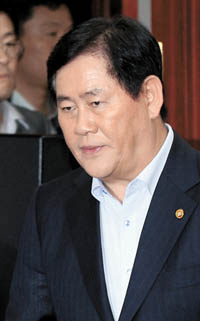 That’s at the same level as the Bank of Korea’s 2016 growth forecast, which was adjusted downward in July, and higher than the 3.1 percent by the state-run think tank Korea Development Institute.

“China is unlikely to crash-land,” Choi said in an interview with the Wall Street Journal on Friday at a Group of 20 (G-20) Finance Ministerial Meeting in Ankara, Turkey. “It has the capability to manage a soft landing.”

Outside analysts, however, are saying the Korean economy won’t meet Choi’s goal because China’s economic slowdown is looking more and more severe.

After Chinese stock markets started plummeting in June and its central bank devalued the yuan over worries about its own weak exports, the Korean economy and its financial markets were directly hit. The Kospi dropped more than 13 percent in the two weeks since the devaluations, and August exports plunged by 14.7 percent year-on-year.

“The KDI rolled out a forecast of 3.1 percent even before the MERS outbreak, drought and the China risk,” said Jeong Dae-hee, a senior researcher at the Korea Development Institute. “Frankly, it’s difficult to make Finance Minister Choi’s goal unless there is a large economic boost within the next six months.”

China doesn’t have many factors that would revive its economy quickly, Jeong said, because its economy has matured and global investors are losing trust in the Chinese government’s ability to turn it around.

In response, Korean exporters should move quickly to boost exports to other markets like the United States and Europe, where economies are slowly reviving.

Choi, however, said the government will fix this year’s growth forecast at 3.1 percent, citing governmental efforts such as the 22 trillion won ($18.4 billion) supplementary budget and BOK interest rate cuts.