Catchy songs could pose a problem on test day

Catchy songs could pose a problem on test day 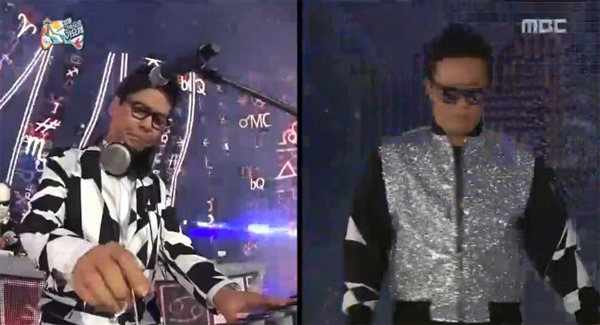 Yoon Sang, left, DJs while his partner Jung Jun-ha shows off his rap skills in the song “My Life” on “Infinite Challenge” last month.

With the College Scholastic Ability Test, also called the Suneung, only two months away, high school seniors are not only studying hard but are also working to maintain their physical and mental health in order to up their chances of success. Some young Koreans even take special oriental medicine designed to help them concentrate better.

Despite such efforts, however, many high school seniors are complaining that their exam preparations are being disrupted by so-called forbidden Suneung songs. The term refers to those musical pieces with highly addictive melodies and lyrics that become stuck in one’s head, which in English are called earworms, and which apparently prevent students from being able to focus.

“I just can’t get those forbidden Suneung songs out of my head. I shouldn’t have listened to them in the first place. I’m afraid that the melodies and lyrics will be playing in my head during the actual exam,” complained a 20-year-old student who is scheduled to take the exam on Nov. 12.

Nominated by Internet users, a few of the most well-known forbidden songs include “My Life,” by Jung Jun-ha and Yoon Sang, and the hip-hop track “Oppa’s Car” by Incredible, Jinusean and Tablo.

Even though the popular sentiment was that Jung’s rapping was immature, the song generated buzz and many people found it strangely addicting, especially the line that goes, “As-salamu alaykum, swadicap, hello, bonjour.”

And while many people didn’t like the song or the lyrics, the line has become a popular way to finish a sentence.

Although some people may not be familiar with the concept of forbidden Suneung songs, it has actually been around for several years. A few other examples include “Tell Me” by the girl group Wonder Girls and “U R Man” by the now-defunct boy group SS501, both of which came out in 2008. Another track that is almost always mentioned when discussing forbidden songs is “Ring Ding Dong” by the all-male act Shinee, which was released in 2009.

So while these catchy, addictive tunes might be enjoyable to most people, for young Koreans preparing for university, and what might be the biggest exam of their lives, the silly songs are no laughing matter.