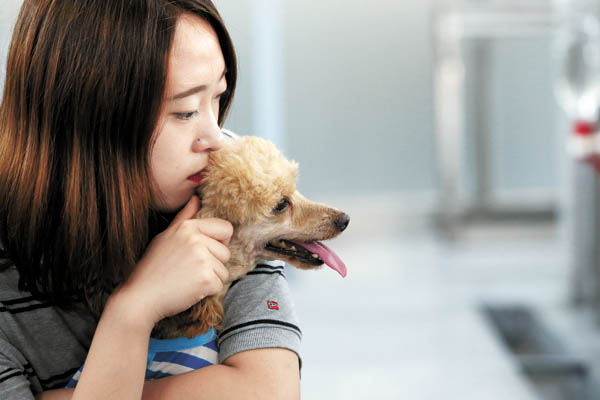 As soon as the door of the training center opens, 26 small-sized dogs with well-groomed fur start jumping up and down all at once. This is a desperate act by the little creatures trying to receive more attention from the visitor. When the visitor reaches out a hand, they excitedly lick and rub their heads against it.

This is a common scene at the Gyeonggi Assistance Dogs Sharing Center, or Nanum Center.

Even though all the dogs seen at the center last week have been abandoned, they are as bright and adorable as any puppy waiting for its first owner at a pet shop.

At Nanum Center, there are three separate rooms where the dogs receive training and live until they are adopted. There are 55 dogs in total, all of which have been well groomed for potential new owners who may or may not come.

At 3,600 square meters (38,750 square feet), the training center located in Hwaseong, Gyeonggi, opened in March 2013. The center’s main role is to take in abandoned dogs and treat, train and groom them so that they can be adopted out to households or become assistance dogs for people with disabilities.

The animals taken in by the center first receive training for a month before they’re put up for adoption. Currently, there are two vets, the center’s CEO Yeo Woon-chang and team leader Nam Young-hee, and three dog trainers, Jang Bong-duk, Song Min-soo and Kyung Ji-yoon, working for the center.

Nam, who has been working at the center for three years, said, “When people think of abandoned dogs, the first image that comes to their minds is gloomy-faced dogs with overly tangled and untidy hair. And because they have already been hurt before after being given up by their owners, some of those dogs growl and even try to bite when a person approaches, which is one of the reasons that people looking to adopt an abandoned dog change their minds.”

“However, those dogs adopted from our center are different,” she added.

According to the staff of the center, one of the biggest reasons behind the difference lies in “the center’s special system for managing stray dogs.”

Nanum Center has a highly organized management system for training its dogs. Within the system, the dogs at the center start their day at 9 a.m., when the three trainers arrive at the training center. Each trainer is responsible for coaching 20 dogs.

The trainers first clean up the dogs’ feces and wash the area. And this act is repeated once every two to three hours. While cleaning up, the trainer compliments those dogs who did their business in the correct place, which motivates them to repeat the good behavior.

Trainer Kyung, for instance, scratches under the chin of a female mixed-breed named Bang Geul-yi after she successfully achieves potty training. 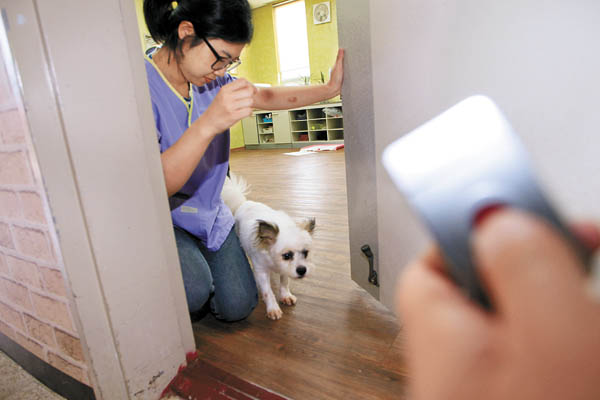 At 10:30 a.m., the center employees connect with the animal protection management system that provides information about dogs that have been abandoned in Gyeonggi. This is intended to bring in new dogs that have lost their homes.

Regarding how the center chooses which dogs are brought to the center, Yeo said, “Since dogs are mostly raised inside an apartment, it is inevitable [for us] to mostly bring in small-sized dogs. Also, big-sized Jindo dogs [native Korean dogs originating from Jindo Island known for their intelligence, strength and agility] are difficult to adopt out because they tend to show loyalty only to their first owners.

“In fact, Maltese, Shih Tzus and poodles are the most common breeds that are given up and they are also the very types that we bring in the most.”

After making a list, the five workers from the center head to any of the 26 animal shelters situated in Gyeonggi. It’s not an easy task, as it takes up to as long as two hours to reach the animal shelter with the highest number of abandoned dogs situated in Yangju. While visiting various animal shelters, they check the dogs that they included on their list.

There are various criteria that Nanum Center staff consider when deciding which dog to bring back to the center.

For instance, trainer Jang tries petting the dogs. If the dogs show aggressive behavior or overly avoid human contact, they are eliminated from the list. The trainer also checks whether the dogs respond to the sound of a cell phone alarm. 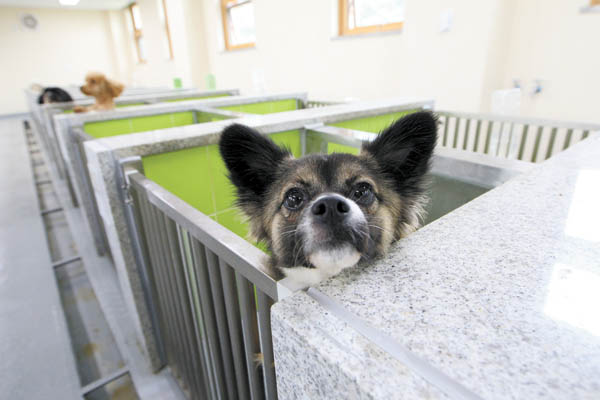 A number of abandoned dogs up for adoption welcome visitors

While testing the cell phone alarm at one of the shelters, a white mixed-breed dog approaches the place where the sound originates and pricks up its ears to listen while barking at the same time.

“It is a form of showing attention. If a dog’s ears are hurt or if it is insensitive to sound, it can’t be trained to assist disabled people,” Jang said. As a result, the white dog has passed the test.

There are 15 different tests that a dog needs to pass in order to be brought to Nanum Center. The institution brings as few as four dogs on some days and sometimes as many as 10 on other days. On the day center employees met the white mixed-breed dog, they picked out four dogs in total.

By 4 p.m. those newly chosen dogs arrive at Nanum Center. The first course of action for the new arrivals is to groom and trim their fur. After getting a makeover, the dogs are injected with various vaccines, including measles, infectious hepatitis, Leptospira, parvovirus and parainfluenza. 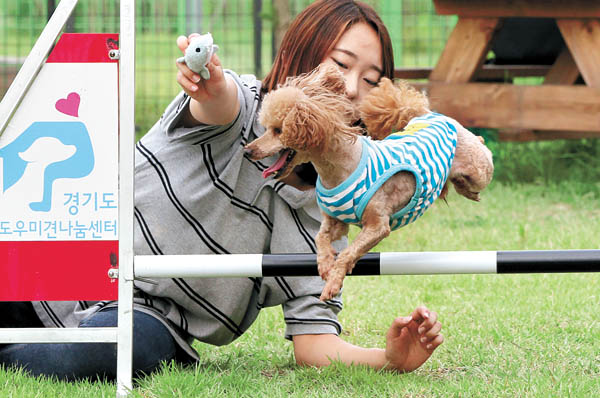 Trainer Kyung coaches Mango to jump over a hurdle.

If the dogs feel afraid of getting their shots and try to avoid it, a good way to calm them is to “hold their legs using [the left] hand and arm while embracing its face using the right hand.” According to one of the trainers, Kyung, this is an effective way to make dogs relax before administering vaccines.

At the same time, trainer Song, who is responsible for coaching dogs to assist people with hearing impairments, is busy training dogs to become assistance dogs.

When Song generates the sound of a doorbell, one of the dogs swiftly approaches the trainer and scratches his leg. When Song waves his finger from side to side, the dog leads him to the place where the sound came from.

“[The dog is] alerting me that a sound has been made. Waving my finger is a sign of me asking to take me to the place,” said Song.

The total amount of time required to train a dog to become an assistance dog is around two years. In fact, 70 percent of them fail to make it to their first test, which is given after six months of training.

An hour later at 5 p.m. may be the happiest time of the day for the inhabitants of Nanum because it’s time to eat.

Even though some other places offer dogs two meals a day, that is not the case at Nanum Center.

“As the core purpose [of our center] is to train dogs, we have limited the frequency of providing meals to only once. But if they perform well while being trained, they are given extra food and treats,” explained Kyung.

Nanum Center definitely seems to be contributing to helping out abandoned dogs, as it helped 24 dogs find new homes in July alone. Since the center was launched three years ago, it has placed 155 in new homes.

Nanum also provides support after adoption by allowing the dogs to return to the center for treatment when necessary, which is one of the contributing factors that makes the center’s rate of return after adoption as low as 8 percent compared with 40 percent recorded by regular dog shelters.

In Gyeonggi alone, an average of 5,000 abandoned dogs out of 15,000 are euthanized every year.

In addition to what it has achieved so far, Nanum Center also has plans for bigger things.

“I was originally a vet responsible for preventing epidemics. Since taking charge of the center three years ago, I couldn’t stop myself from wondering why people would give up on their dogs,” said Yeo.

The CEO soon found the answer, at least in part, explaining, “In Korea, there aren’t many places for people to enjoy culture with their dogs, which is one of the reasons. And that’s why we are planning to launch a cultural center for dogs.”