Reunions set for end of October

Reunions set for end of October 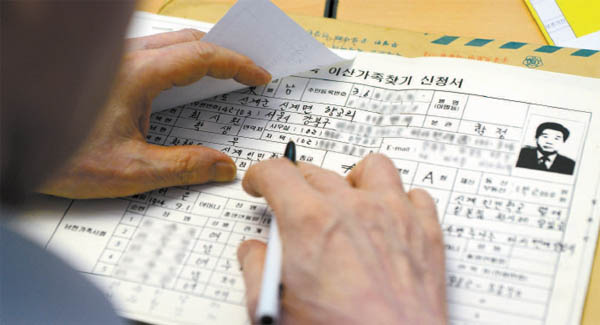 A man fills out an application for reunions of families separated by the 1950-53 Korean War at the headquarters of the Korean Red Cross in Jung District, central Seoul, on Tuesday. The two Koreas agreed Tuesday to hold reunions at Mount Kumgang from Oct. 20 to 26. The last reunions were held in February 2014. [NEWSIS]

South and North Korea Tuesday agreed to hold reunions for families separated by the 1950-53 Korean War from Oct. 20 to 26 at the resort at Mount Kumgang, which will mark the first such reunions in 20 months amid heightened expectations for an improvement in inter-Korean relations.

South Korea’s Ministry of Unification said the two sides agreed after negotiations that lasted nearly 24 hours at the border village of Panmunjom, which ended at 10:10 a.m. Tuesday.

Under Tuesday’s agreement, 100 families will be chosen from each side to reunite with their loved ones after over 60 years of separation at a facility at Mount Kumgang exclusively devoted for such reunions. The relatives have had no means of communicating since the division of the peninsula caused by the three-year conflict half a century ago.

“On the shared perception of the need to address the humanitarian issue of separated families, the two Koreas agreed to hold additional Red Cross talks soon to discuss remaining issues,” said Lee Duk-haeng, who led a three-member delegation from the South, during a press briefing Tuesday after his return from the border village. 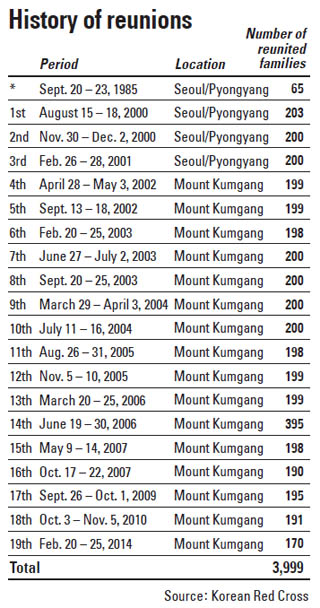 The agreement on the reunions was part of an Aug. 25 deal between South and North Korea that defused tensions on the peninsula.

Of 250 candidates sent by Seoul, 50 will be Koreans who were abducted by the North or were prisoners of war during the Korean War.

It was rumored that the three officials from Seoul pressed their North Korean counterparts to agree to hold reunions on a regular basis and enlarge the numbers. When asked, Lee said the two sides agreed to address the issues in future talks.

Lee said the North did not raise several longtime demands at the talks, such as the removal of economic sanctions imposed in retaliation for the sinking of the Cheonan warship in 2010 or the resumption of South Korean tours to Mount Kumgang.

One ministry official said on condition of anonymity that the upcoming reunions will be the last such event this year, considering the advanced age of applicants and the approaching winter. If progress on further reunions is made, the next reunion could take place as early as next February.

The official also noted the two Koreas agreed that checking whether separated relatives are still alive or dead through an exchange of a full list of relatives should be a top priority, although it wasn’t stipulated in the Tuesday agreement.

The prospect of a further thaw in inter-Korean relations could be sunk if North Korea decides on another provocation, such as the testing of a ballistic missile on Oct. 10, the 70th anniversary of the foundation of the Workers’ Party of Korea. That would also probably scupper the Oct. 20 to 26 reunions.

The first reunion for separated families occurred in 1985, when the South and North each sent around 30 relatives to the other side. Thirty-five South Koreans reunited with 41 North Korean relatives in Pyongyang, while 30 North Koreans met 51 relatives in Seoul. The 1985 reunions, however, did not develop into a regular event.

It took 15 years for the two Koreas to regularize reunions, one of the outcomes of a joint declaration that came from the first leaders’ summit in Pyongyang in June 2000.

The first reunions after the summit between Kim Dae-jung of the South and Kim Jong-il of the North were held at the Sheraton Hotel in Seoul and Koryo Hotel in Pyongyang for three days from Aug. 15, 2000, reuniting 1,172 relatives from both sides.

The emotional events were held semi-annually during the Kim Dae-jung and Roh Moo-hyun governments, which aimed to engage Pyongyang through a package of economic aid and cooperation. At Pyongyang’s behest, reunions took place at Mount Kumgang from 2002.

The regular reunions were disrupted in 2008 when the conservative Lee Myung-bak government took power.

That was also the year when a female South Korean tourist was fatally shot by a North Korean guard at the Kumgang resort for unknown reasons, suspending the tourism business that had been a cash cow for Pyongyang. The tour program is still at a halt.

The reunions resumed in 2009 and continued the next year. The last reunions took place early last year after a nearly four-year gap.

Over the past 15 years, a total of 18,799 relatives have been reunited, though only briefly in reunions that last three days. Each reunion brings together a new set of relatives who haven’t seen each other since the Korean War.