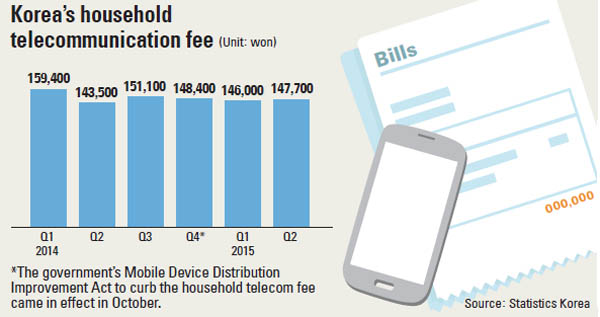 Almost 5 million Korean subscribers haven’t paid their mobile phone bills for the last three months and owe a total of about 1.85 trillion won ($1.5 billion) in unpaid fees, a lawmaker says.

According to data submitted by the Korea Association for ICT Promotion (KAIT) to Rep. Choi Won-sik, of the New Politics Alliance for Democracy (NPAD), on Wednesday for the parliamentary audit, the accumulated unpaid telecom fee reached about 1.85 trillion won for some 4.6 million subscribers as of the end of August.

Customers who have unpaid fees of 10,000 won or higher are automatically registered on KAIT’s list of debtors if they fail to clear the fee within two to three months. These people are banned from opening another phone number at other telecom carriers.

Other carriers KT and LG U+ don’t have such a rule, so the unpaid fees are reflected on each company’s debt for three years.

These two carriers have more unpaid fees than SK Telecom. KT had the largest, about 80.7 billion won including both mobile and landline fees, followed by LG U+, which had 37.6 billion won, and SK Telecom, with 27.6 billion won.

The main culprit of such high personal debt from telecom carriers is the fee system itself, said Choi. Household telecom spending still takes up a large portion of monthly income despite the Park Geun-hye government’s Mobile Device Distribution Act and other initiatives to lower the household telecom fee, he said.

“The real monthly income that regular people feel is getting tighter as the economic downturn continues and the high unemployment rate and part-time jobs expand in the job market,” Choi wrote in a statement.

According to Statistics Korea data, monthly household spending on telecom services declined to 148,400 won during the third quarter of last year, from 151,100 won the quarter before, thanks to the mobile distribution act that came into effect last October. The act reduced numbers of telecom consumers switching to high-end new smartphones, by controlling each carrier’s subsidy amount.

However, this year the household telecom fee has risen again, from 146,000 won in the first quarter to 147,700 won in the second quarter, about 6 percent of an average four-person households’ monthly spending, as many data consumption-oriented services are introduced.

“It’s not easy to solve the household telecom fee issue simply with the mobile distribution act,” said Choi. “The government has to come up with some practical solutions that can actually lower telecom service fees to reduce the financial burden on households, like allowing the phone manufacturers to directly sell devices to consumers and making telecom signals compatible so that consumers can use low-end devices purchased overseas.”