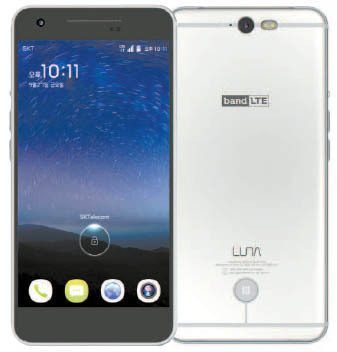 There’s a new kid on the block in Korea’s smartphone scene, with a sleek metal design, competitive features and a price tag about half that of most premium phones.

The device’s name is Luna, but its parents are neither Samsung Electronics nor LG Electronics.

Luna is the result of a collaboration between Korea’s lesser-known IT vendor TG&Co, mobile carrier SK Telecom and Foxconn, a Taiwanese manufacturing company.

Released on Sept. 4, the smartphone retails for 449,900 won ($380) but offers specs higher than most of its mid-range peers and comparable to Samsung’s earlier flagship Galaxy S5.

The model sold out several times on SKT’s official online store, and many distribution channels saw stock shortages due to higher-than-expected demand.

SK Telecom declined to unveil the number of units sold so far.

The 4G-enabled Luna features Qualcomm’s Snapdragon 801 processor that was used in the Galaxy S5.

The model is fitted with a 13-megapixel rear camera and an 8-megapixel front-facing camera with a 5.5-inch display.

The front-facing camera is higher resolution than on competing budget phones like Samsung’s A5, A7 and LG’s Band Play, all of which top-out at 5 megapixels.

But the major difference between Luna and other mid-range phones comes from the processor.

Many mid-range phones like the Grand Max by Samsung Electronics and Band Play use the Snapdragon 410 with a 1.2 GHz Quadcore, while Luna’s Snapdragon 801 supports the noticeably faster 2.5 GHz Quadcore.

Aside from its competitive functionality, Luna’s slim metal body is reminiscent of Apple’s iPhone and appears to be appealing to younger consumers, given that budget phones usually feature clunky plastic bodies.

The popularity is the latest indication that smartphone users have become wary of high-end devices and are more attracted to budget models.

The switch appears to have been triggered by a regulation last year that limited the subsidies telecom companies could offer on new phones.

Before the regulation, the prices of flagship smartphones were often lowered to the 300,000 won range, though the release price ranged from 800,000 won to 900,000 won.

The regulation passed more costs onto consumers, with the government claiming that competition to increase subsidies to bring in subscribers distorted the market.

But the preference for cheaper devices is also because phones in the 100,000 won to 500,000 won range are no longer simple, minimal-function gadgets. Budget phones from Samsung, LG, Microsoft and Lenovo now come with decent processors and cameras that stand up to the higher-priced competition without breaking the bank.

“We acknowledged that more and more people move towards competitive budget phones,” said Kim Seong-soo, a director at SK Telecom. “We continue to focus on producing affordable smartphones with higher functions to meet the needs of customers.”

The latest project to produce Luna took a fresh approach. SK Telecom used to cooperate with top-tier vendors Samsung and LG on models, but this time, it worked with the non-mainstream TG&Co to offer competitive prices. The vendor is a subsidiary of TriGem Computer, a computer hardware manufacture that has never produced a smartphone before.