Tears of determination for Olympic goal

Tears of determination for Olympic goal 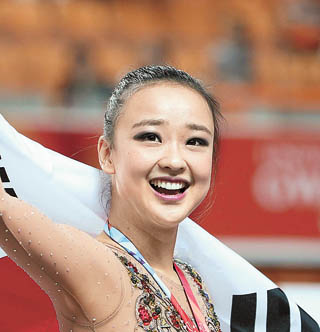 Despite heavy criticism online, rhythmic gymnast Son Yeon-jae has never showed her tears. But a disappointing finish at the 34th Rhythmic Gymnastics World Championships in Stuttgart, Germany, brought her to tears.

The result gave her a pass to the 2016 Summer Games in Rio de Janeiro, as the top 15 performers are given credit, but this a disappointing result for Son, who had never finished below the top 10 in international competitions since the 2010 Worlds in Montpellier, France.

“I feel regret because I couldn’t show 100 percent of what I did in practices and training,” Son said at Incheon International Airport on Sunday.

Mistakes were the culprit in her performance at the Worlds. In the all-around final, especially the ribbon performance, she had trouble controlling the ribbon and steps, which resulted in her poor 16.116 points. There were only two rhythmic gymnasts who performed worse than Son.

Son, the 2014 Asian Games gold medalist, tried to patch up her performance in ribbon but couldn’t make progress. In her last performance in ball, she made another mistake by dropping the ball while rolling it on her back. Her score of 17.483 in ball was 14th among 24.

After finishing her performances, Son was seen crying in the arms of her coach. “There were problems related to my stamina, but a problem in my mentality was the big factor,” Son said of her mistakes. “Since this is an important event, where a ticket to the Olympics is up for grabs, I think I had a lot of pressure.”

Son’s physique suffered because of an ankle injury. Although many top-class gymnasts didn’t participate, Son in July gained her confidence by winning all-around gold at the Gwangju Summer Universiade, edging Melitina Staniouta of Belarus and Ganna Rizatdinova of Ukraine.

But in the Worlds, both Staniouta and Rizatdinova performed better than Son. Staniouta finished third, while Rizatdinova was fifth. Meanwhile, Russia’s Yana Kudryavtseva and Margarita Mamun were the top two finishers at 75.632 and 74.766, respectively.

Experts said Son’s program composition wasn’t bad at the Worlds, but her poor execution was to blame.

“Staniouta and Rizatdinova had simple compositions, excluding a couple of individual events, but they both had very good executions,” said Cha Sang-eun, a rhythmic gymnastics analyst for MBC. “Until the Summer Olympics, Son should work on enhancing her execution level instead of upgrading compositions.”

At the 2012 Summer Games in London, Son became the first Korean gymnast to perform in the all-round final and finished fifth.

“Before thinking about the result, what’s critical is how I spend the time until the Olympics,” she said. “I will work hard both physically and mentally in order to become the strongest athlete at the Olympics. I hope it can be a stage where I can show my best performance for which I worked for the last four years.”

Son will have a gala show on Sept. 26 and 27 before going to Russia for her 2016 training program.