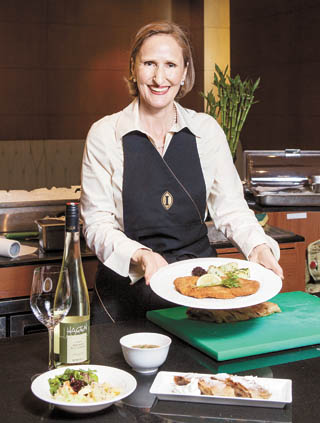 Austrian Ambassador to Korea Elisabeth Bertagnoli serves up freshly made Wiener schnitzel at the InterContinental Seoul COEX in southern Seoul, with side dishes including apfelstrudel. By Park Sang-moon

In order to explain her native country to locals in the easiest and quickest way possible, Austrian Ambassador Elisabeth Bertagnoli said she relies on three key words: Mozart, “The Sound of Music” and Wiener schnitzel.

It is then that many people who had mistaken her country with Australia nod their heads. And for that reason, the decision to cook a classic sample of the Austrian national dish, Wiener schnitzel, using veal and chicken was made without hesitation.

Highlighting that no Austrian meal is complete without a dessert, the first female ambassador to be featured in this series made sure to whip up apfelstrudel, a pastry filled with apples, to go along as a side.


Q. Why did you choose Wiener schnitzel as today’s main dish?

A. Austrians love to eat and drink just as much as Koreans, so there were a lot of great dishes to choose from. I suggested Wiener schnitzel because it is such a classic and traditional dish that is recognized around the world and can be easily prepared.

I added a few dishes on the side - a salad of cucumbers and potatoes, and potatoes sprinkled with parsley - which is the normal practice when cooking this menu item. There is no real Austrian meal without sweets, so I decided to present apfelstrudel as well. This meal also goes well with white wine like Gruner Veltliner and Riesling, or a cup of Vienna coffee. At the very end, a glass of Schnapps [a type of fruit brandy] will do.

If you like hearty, flavorsome and sweet dishes, you will love Austrian food. Food from Austria mixes Central European produce, textures and flavors with influences from Italy, Hungary, Bohemia, Germany and the Balkans, creating a unique fusion of styles. Austrian cuisine has developed through centuries of social and political changes and was heavily influenced by neighboring regions during the Habsburg Empire’s six-century reign.

Savory Austrian food is primarily based on meat, poultry, root vegetables, dairy and grains, with beef, pork, geese and chicken being the most popular meats. Pork in particular is widely used in Austrian cuisine, including in sausages and roasts. The famous roast pork dish schweinebraten is a traditional Sunday lunch dish served in Eastern Austria. The pork loin comes with a crunchy crust topped with cumin, and is served with dumplings and a white sour fermented cabbage called sauerkraut, our kimchi.

Austrians in general love to enjoy rich clear soups with all sorts of solid ingredients, which differ by region. While carrots, parsnips, turnips, leeks and celeriac make for a good broth, it is the extras that count: semolina balls, liver dumplings, bacon dumplings, strips of pancake, soup pearls, and egg puffs. 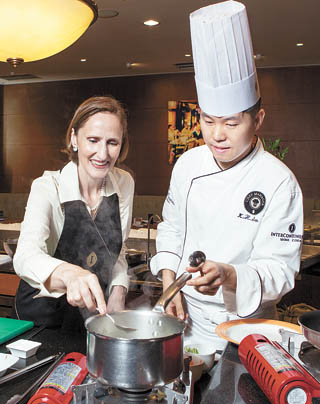 Austrian desserts enjoy a reputation that is probably only topped by Mozart. They work their magic using chocolate, soft cheeses, yeast, compotes and jams. Hardly any page about Austrian food can overlook Sacher torte, an Austrian chocolate cake with apricot jam filling. There are also loads of other fantastic cakes served in Austrian patisseries, such as dobos torte [a sponge cake layered with chocolate buttercream and topped with caramel], esterhazy torte [layers of almond meringue iced with buttercream], imperial torte [chocolate truffle] and kardinal schnitten [a light meringue].


What aspect of Korean cuisine can you find in Wiener schnitzel?

Koreans love fried foods and meat, and Wiener schnitzel is very similar to the popular local fried pork dish tonkatsu, though the Austrian dish is traditionally made out of veal or chicken, rather than pork. The menu item is also served with side dishes similar to many Korean meals.

How has being in Korea changed your appetite or the way you cook?

I love to discover different tastes and new kinds of vegetables and fruits. In Korea, I’ve fallen in love with persimmons, Korean pears and mandarins from Jeju Island, as well as jujube and traditional Korean teas. 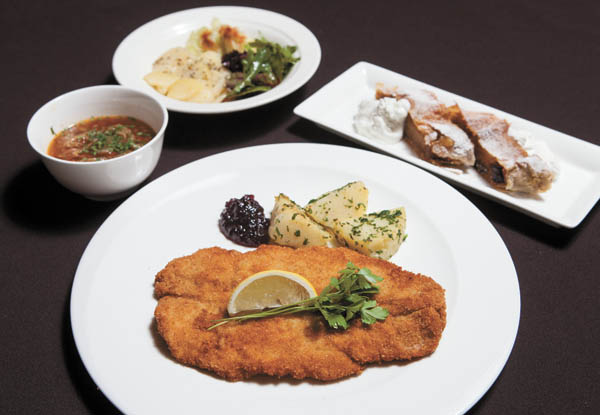 What Korean dishes are you most fond of?

I like bibimbap [rice with mixed vegetables], samgyetang [chicken soup with ginseng], jjigae [stew] and galbi [barbecued short ribs] to name a few. In particular, I enjoy the experience of eating temple food, which requires sitting on the floor. In the summertime, cool and refreshing sweets like bingsu [shaved ice flakes] are appetizing. Kimchi can be a bit too spicy for me.


What are the best restaurants in Seoul serving Austrian cuisine?

Chef Meili in Hannam-dong, central Seoul, is one of the few Austrian restaurants in the capital that produces its own sausages and Austrian dark bread. The owner, Christian Meilinger, operates the restaurant and frequently helps me serve traditional Austrian food for special events at my residence. Wiener Heuriger, near Gyeongbokgung Station on subway line No. 3, is another Austrian eatery that has recently opened.


Please give us your personal observations about Korea and how it compares to Austria or other countries in which you have lived.

I really love living in this vibrant and interesting country, which has overcome a difficult modern history to become one of the world’s largest economies with the Miracle on the Han River. Austria, too, overcame a rough time following the collapse of the Habsburg Empire in the wake of World War I and then with World War II. But Austria has grown into an independent, neutral republic, joining the UN in 1955 and E.U. in 1995. It is noteworthy that Vienna serves as the headquarters for numerous international organizations, including the UN, International Atomic Energy Agency, Organization for Security and Co-operation in Europe and the Organization of the Petroleum Exporting Countries. 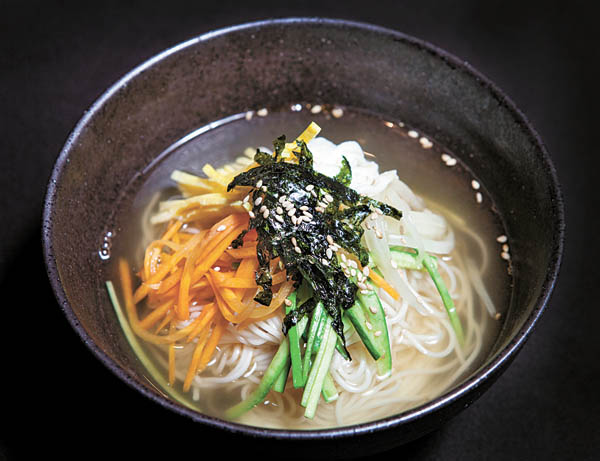 Koreans are kind, and their love for art, culture, nature and history are similar to that of Austrians. I am fascinated by traditional Korean music, including pansori [traditional narrative singing]. Austrian musicians love coming to Korea because there is so much interest and enthusiasm for music here, especially among young people. Many Korean students travel to Austria to study classical music.

It is possible to encounter Austrian music in Seoul, through visits by the Vienna Boys’ Choir and Wiener Philharmoniker, as well as live broadcasts of Wiener Philharmoniker’s famous New Year’s concert and the Salzburg Festival at the local theater chain Megabox. There are also Korean productions of the musicals “Mozart,” “Rudolf” and “Elisabeth” performed by famous K-pop singers.

I appreciate how Seoul, a huge megacity, is safe and environmental, with lots of mountains and parks. One of the key differences, however, is that life in Austria is more laid back, with people opting not to act so bballi bballi [hurry, hurry].

One of my favorite activities in Seoul is hiking. As an Austrian, I love nature, and I’m always fascinated by the presence of it in the middle of a huge city, like in Seongbuk-dong, northern Seoul.

The various temples scattered throughout the country offer rest and peace from my very busy schedule as one of the few female ambassadors in a relatively small embassy.


Every great capital has a diplomatic corps representing their countries and promoting their own cultures. Ambassadors are expert entertainers and their spouses are often skilled at introducing the cuisine of their homeland to their foreign hosts. In this series, the Korea JoongAng Daily asks the spouses of Seoul’s ambassadors to introduce our readers to a favorite entree from their homelands. In each installment, her excellency will be joined by a chef from one of the two InterContinental hotels in Seoul who prepares a Korean dish that complements the foreign offering. Mashitge deuseyo, guten appetit and bon appetit!