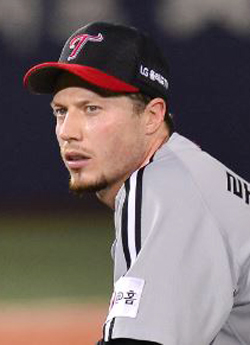 LG Twins’ Lucas Harrell was the losing pitcher on Saturday against the Kia Tigers in Gwangju after he allowed seven runs in 3 2/3 innings. It was his 10th loss of the season (along with eight wins) in 30 games.

But what disappointed Twins manager Yang Sang-moon was not only his performance, but his manner. The 30-year-old right-hander was previously criticized for behaving aggressively on the mound, and on Saturday, he again exploded.

After showing his dissatisfaction on the umpire’s call on strikes, Harrell in the fourth inning threw his glove on the ground after his teammate and third baseman Luis Jimenez failed to catch his throw when clearing the Tigers’ sacrifice bunt.

The behavior seemed not only to bother Twins fans, but also his teammates. After a 7-3 loss, Twins manager Yang Sang-moon sighed at Harrell’s behavior. According to Yang, the former Chicago White Sox and Houston Astros player also didn’t behave well with catcher Yoo Kang-nam who tried to cool the pitcher down. Yang said he won’t demote Harrell to the minors, but will ask the team to fine the American for his behavior.

Harrell currently gives up the most base-on-balls in the KBO at 98. But before improving his game, he might need to better control his temper first to help his team.