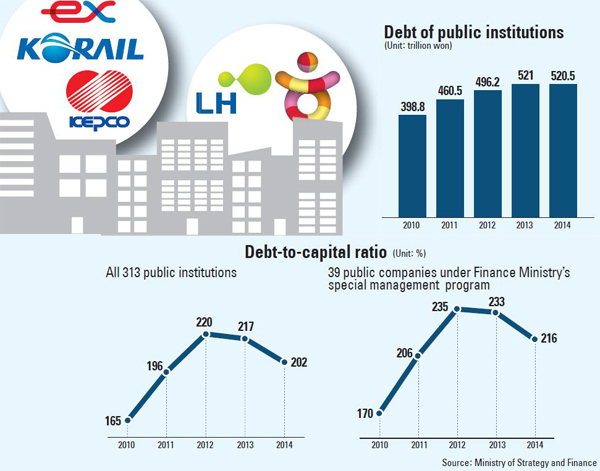 The debt-to-capital ratio of the 39 largest and most debt-ridden public companies is expected to fall to 197 percent by the end of this year, the first time the ratio will go below 200 percent since 2010, according to the Ministry of Strategy and Finance.

The prediction comes from the Finance Ministry’s mid- to long-term financial management plan for public organizations from 2015-19, released Wednesday.

The plan is based on the assumption that there will be no price hikes with utilities or other public services.

The ministry says the improvement is largely due to the Park Geun-hye administration making the reduction of public sector debt a flagship policy goal since 2013.

The companies are expected to have debts totalling 496.6 trillion won ($420.6 billion), down from 497 trillion won last year.

With assets at more than 2 trillion won each, the companies have all been placed into a special intensive management program by the ministry due their excessive debts, which stem from careless investments and lax corporate management practices.

This year, the companies are expected to see net profits increase due to the Korea Electric Power Corporation’s sale of its former headquarters in Samseong-dong, southern Seoul, which is predicted to bring in a multi-trillion won payday.

The 11 basic infrastructure companies on the list, including the Korea Land and Housing Corporation and Korail, are expected to see their debt-to-capital ratio hit 224 percent by the end of this year, with a total debt of 223.1 trillion won.

Debt will increase by almost 7 trillion won next year, mainly due to the government’s ongoing public housing and railway projects.

The 12 energy companies, including Kepco and the Korea Hydro and Nuclear Power Corporation, will record a debt-to-capital ratio of about 198 percent this year with 171 trillion won of debt. The amount of debt will increase steadily due to additional nuclear power plants planned in the years to come and a slowdown in sales due to falling oil prices.

The ministry initially aimed to reduce the debt ratio below the 200 percent mark by 2017, when the long-term financial management plan for 2014-18 was announced last September.

The new plan has gotten more ambitious than last year’s, aiming to take an additional four percentage points off the debt ratio by 2018.

In the next five years, the debt ratio of the 39 companies is expected to decline to 163 percent in 2019, the Finance Ministry said, with the total debt staying near 510 trillion won.

The debt reduction will contribute to enhancing the fiscal soundness of the overall public sector, the ministry said, because the large companies’ debt accounted for 96 percent of the total debt held by the 313 institutions run by the state.