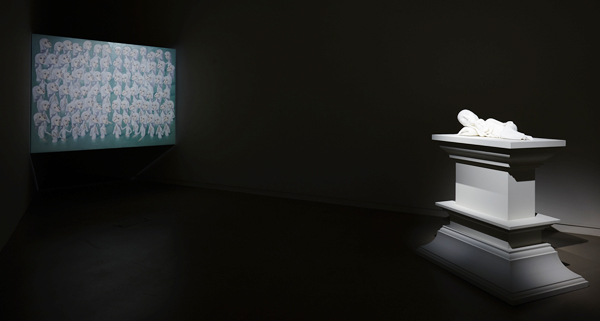 Yeesookyung, one of the most prominent contemporary Korean artists, is perhaps best known for her series of ceramic sculptures that use broken porcelain pieces.

However, at her current show, “Saint Breeders,” she’s displaying a whole new type of art, this time resorting to different media like paint, video and even 3-D printing.

In fact, the show being held at Atelier Hermes in southern Seoul is showcasing her latest, experimental works in which she explores delicate issues like spirituality and the inner self.

What’s interesting, however, is that although the pieces are all new, created this year, they somehow share a common thread with her previous works.

For instance, a video piece titled “White Shadow” shows the artist dancing amid traditional, religious festivals in places like Tainan in Taiwan, Niigata in Japan and Gangjin in Korea. Another video piece, “Shadow Dance,” features a traditional Taiwanese opera dancer performing at the Museum of Contemporary Art in Taipei. In the back, one can see Yeesookyung also dancing. “She’s a shadow, but you can see her moves are different from the dancer’s,’” curator Kim Yun-kyoung said. 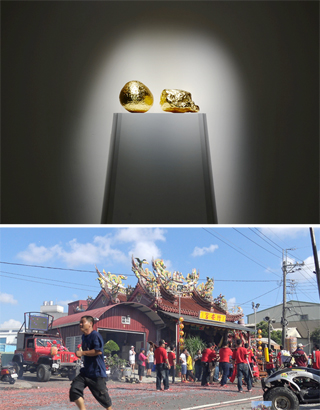 The video pieces are, in a way, a continuation of Yeesookyung’s fascination with traditional dance, which was also manifested in her previous works “Dazzling Kyobangchoom” (2011) and “Twin Dance” (2012). She has recently learned Korean and Chinese traditional dance herself. “I always believed that people perform best when they use both their bodies and minds,” she said.

Continuity really takes center stage in her new project, “You Were Here.”

The artist made a pair of stones covered in gold foil. She kept one for herself and dedicated the other to Baekryeon Temple in Gangjin, South Jeolla. The head monk of the temple gave two new stones to her, which she again gilded. She kept one for herself and gave the other to an acquaintance of the head monk. That acquaintance, in return, gave her
two new stones, and the process
continues.

With “Past Life Regression Painting,” Yeesookyung further delves into her inner self. She resorted to hypnosis to visit her past lives, and the scenes in the painting bring to life her former selves.

Yeesookyung says although most museums and art lovers abroad want her to display her iconic ceramic sculptures made of broken porcelain pieces, she always wants to venture into new genres and technologies.

For the “All Asleep” series, she used 3-D printing technology to create figures from Asian mythology and folklore like “Princess Bari,” “Xiwangmu” and “Tara.” She made the drawings, while a technician created the pieces with a 3-D printer.

Yeesookyung added that she was able to explore everything she’s ever imagined for this exhibition, thanking the Fondation d’enterprise Hermes, which runs Atelier Hermes, for allowing her the freedom. Kim Ju-youn, the communications director for Hermes Korea, explained that providing that kind of artistic
freedom is the foundation’s exact mission.

Yeesookyung added that many of her planned exhibitions for the rest of this year will take place in the United States.