The next MERS outbreak

The next MERS outbreak 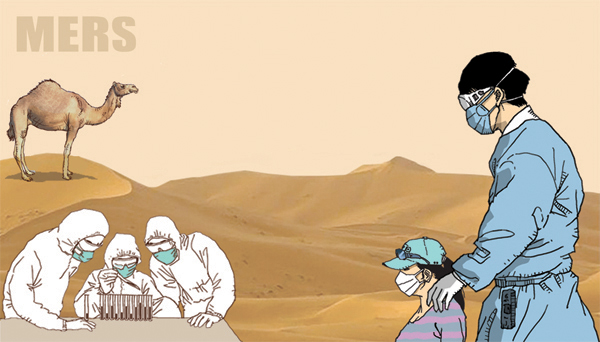 Sept. 21 is the beginning of the annual Hajj pilgrimage to Mecca in Saudi Arabia. Why should this matter for Korea? Because one cannot discount the potential of another outbreak of Middle East respiratory syndrome (MERS) in the ensuing weeks and months. Obviously, many Koreans are not likely to be involved in the pilgrimage, but Korea is proof that the MERS virus can travel through a single infected individual who visits the region for business or tourism or studies and then returns to Korea.

MERS is probably an experience that most Koreans would prefer to forget. This country experienced the second-largest outbreak in the world with 186 cases and 36 deaths — a 19 percent fatality rate. MERS was less rampant than the SARS outbreak in Asia in 2002, but it seems to be a more deadly virus. It was not too long ago that Korean subway stations, department stores and markets were underpopulated with many citizens putting themselves into self-containment, staying inside to avoid being infected. The outbreak
was of such concern that President Park Geun-hye postponed her summit trip to the White House last June, and the Bank of Korea lowered the base rate 25 points to try to offset the economic impact. Tourism dried up over the summer months from China and parts of Southeast Asia.

Most medical experts commend South Korea for their handling of the outbreak even though the country was initially unprepared. SARS had not come to Korea, so the necessary protocols were not in place to deal with an infectious disease outbreak. For example, the lack of isolation rooms for patients, the lack of masks and the absence of established procedures for healthcare workers probably all contributed
to spread of MERS. But the good news is that all of these procedures now appear to be in place as a result of the crisis. And the country should be prepared to stop the next outbreak.

The question now for Korea is whether it can play a leading global role in combatting the next outbreak. The disease is still quite rampant in Saudi Arabia, Qatar and the United Arab Emirates. But these countries have been less willing to share information about the extent of the outbreak, the number of super-spreaders (those who infect more than 10 additional patients) and virus samples for clinical study. This is where Korea can play a useful role. The Center for Strategic and International Studies (CSIS) has been conducting a study over the past year regarding Korea as a global power. In this study, we look at certain functional areas where Seoul can play an off-the-peninsula role in leading initiatives that preserve and contribute to the public goods of the international system. Based on Korea’s experience with MERS, infectious disease may be one of the areas.

First, Korea should be an open source of information and transparency with regard to lessons learned from its MERS experience. As the country with the most cases outside of the Middle East, it has a responsibility to fill the information void left unfilled by the Saudis, and others in Qatar and the UAE. South Korean institutions have already been publishing reports on Korea’s experiences in responding to the crisis, creating new medical protocols and containing the cases.

Second, the public and private sectors in Korea should devote the resources necessary to allow its scientists to play a leading role in finding an anti-viral MERS vaccine for humans. The Middle East is apparently working on a vaccine for camels (the source of the virus), but South Korea in cooperation with the U.S. NIH and others could play this role. This task will not be easy since there is no known
vaccine for the family of corona virus from which MERS and SARS emanate. But there is a great need for someone to take the lead in developing the vaccine.

Third, policymakers should see this not just as a health issue but a foreign policy issue. As a middle power, Korea has played important roles in bringing together countries on nuclear security and with the G-20. In 2017, it is set to chair the Global Health Security Agenda (GHSA), and Seoul could shape the GHSA agenda toward anti-viral vaccines, and developing rapid tests for MERS/SARS.

Fourth, stemming the next MERS outbreak and providing for global health more broadly could be the type of functional issue around which to build cooperation through the Park administration’s concept of NAPCI. Developing anti-viral vaccines are fairly apolitical. Indeed there has already been the start of some cooperation between Korea, Hong Kong and Japan’s international vaccine and health institutes.

Unlike the way the West responded to Ebola, Korea and willing Asian partners could play a critical role in getting in front of the next MERS outbreak.

*The author is a professor at Georgetown University and senior adviser at CSIS in Washington, D.C.