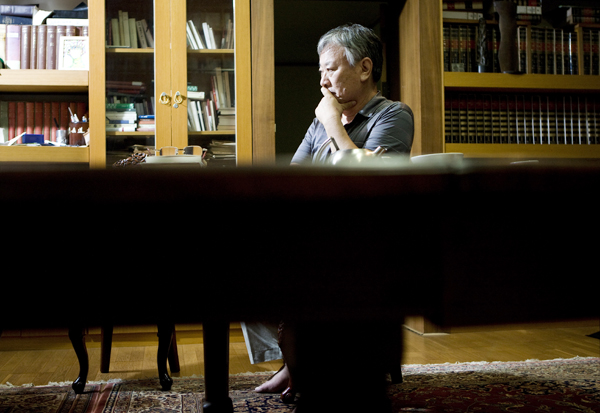 Novelist Yi Mun-yol talks about the recent crisis in the Korean literary world as well as his future writing plans at his house in Icheon, Gyeonggi. By Kwon Hyuk-jae

Yi Mun-yol is arguably one of the most prominent novelists in Korea.

Penning more than 30 short stories and novellas since the 1970s, he has been acknowledged both by the public and the literati for his socially conscious stories that reveal the darker side of Korea’s modern history, including poverty and misuse of political power.

The prolific writer has also swept major literary awards in Korea and been recognized abroad, having many of his works translated into English and reviewed by the foreign press.

There was a time when the towering figure went through a crisis, when his right-leaning political tendencies were too bluntly laid out in his work, which engulfed him in some fierce criticism from liberal commentators and other writers. But that wasn’t enough to compromise his influence in the literary world.

When the JoongAng Ilbo visited Yi’s house in Icheon, Gyeonggi, for an interview recently, the writer was recovering from surgery for kidney
cancer.

He had to have 40 percent of his kidney removed, but thanks to an early diagnosis, he says he didn’t have to go through chemotherapy.

During the long interview, the 67-year-old writer calmly described his recent activities and plans for his future works. As an active participant in the nation’s literary scene for the past 30 years or so, Yi also revealed his thoughts about the plagiarism controversy surrounding writer Shin Kyung-sook that recently shook up the local literary community.

Q. How have you been? You must have been very shocked to hear the cancer diagnosis.

A. Thankfully, it didn’t spread to other organs, so I don’t need to go through chemotherapy. At the end of this month, I am scheduled to have MRI and CT scans. I will know the exact situation by then.

How did you feel when you were first diagnosed with cancer?

They made a 5-centimeter (2-inch) incision in my stomach, put four robotic arms into it and then cut out the cancer cells (Yi rolled up his shirt and showed the surgical scars at this point). I wasn’t myself for the next 10 days. A lot of thoughts crossed my mind. First, I realized the fact that I have become really old, and then the fact that I haven’t got much time left. Then I started to prioritize what I have to do. That was really important because I don’t have forever to do all of the things I have wanted to do.

I agonized over what I could give back to society to pay back what I have received so far. My mind got really busy.

You must have stopped drinking.

It has been about 100 days since I quit drinking. When the checkup result at the end of this month turns out to be positive, I am going to resume it a little. It would be so unfortunate to not be able to drink for the rest of my life.

You must be aware of the recent crisis in the literary world caused by Shin Kyung-sook’s plagiarism scandal. How do you see the incident?

I was devastated to witness where the discussion was heading. The issue should have been approached from the literary perspective, but people’s attitude made the controversy itself a deadly weapon.

Then what is the problem, exactly?

The biggest problem would be the fact that there is not a written-out definition of what plagiarism is. Short stories are usually 60 to 100 pages long and can contain up to 200 Korean words per page. Yukio Mishima’s “Patriotism” [which is alleged to have been plagiarized in Shin’s “Legend”] is a 100-page work that is pretty long, while “Legend” is a 60-page work. The part being scrutinized is about six passages, which is less than three pages. Can we really assert that “Legend” is a completely plagiarized work with this trace portion and thematic similarity?

Maybe it is more appropriate to say it is a partially plagiarized work or an unauthorized citation.

Then what makes a plagiarized work?

“There is nothing new under the sun.” This sentence is mentioned in the Bible, but nobody reveals the source when they use this sentence in their work.

In one of the works from late Korean poet Yun Dong-ju, there is a line that reads, “Wishing not to have so much as a speck of shame toward heaven until the day I die...” This phrase holds the same meaning as one of the teachings from Chinese philosopher Mencius where he says a great man should take delight in having no occasion for shame before Heaven. Similar phrases have been used countless times for thousands of years. But nobody accuses Yun of plagiarism. Such citations without revealing the source is abundant in literature.

Portion plays a critical role as well. If we make a soup out of a cow and a mouse, we don’t call it a mouse soup but rather a beef soup. I think an accusation of plagiarism would be valid when everything from wording to theme is the same except for a few words.

Has there been any heavy-handed case where your definition of plagiarism has been committed?

I don’t recall it right at the moment. But the point is that defining what plagiarism is, especially in contemporary novels, is not as easy and simple as it sounds. I am not trying to defend Shin, but I believe a definition and standard of plagiarism should be established first before going into deeper discussion.

Even if it is a partially plagiarized work, it still upsets the public. What is your standpoint on this issue?

I am not saying we should forgive plagiarism. I just think it should not result in a witch hunt.

If we rigidly assert that covering similar topics is a plagiarizing act, it will result in nothing but an extermination of creativity. Under the premise that establishing a strict rule on plagiarism is difficult, people should at least set up a standard on picking out what should be evaluated as a plagiarized work on a paragraph basis. Also, we should prescribe punishment according to it. Crime and punishment should be correlated. For example, we shouldn’t ask someone to end one’s writing career when only 3 percent of his or her work is plagiarized.

The outbreak of Shin’s plagiarism controversy led to another revelation about the rotten culture of Korea’s literary world, where the nation’s main publishers form a sort of cartel to take turns in printing star writers’ new books and protecting them unconditionally from any kind of criticism. What do you think about this?

I recently participated as a judge in a literary contest led by a newspaper company, and I couldn’t rid of myself of a feeling of boredom and a sense of suffocation from reading the submitted works. Come to think of it, later, I realized it was because the countless works I read there could be classified under only three categories. None of them went beyond that unified standard. I strongly believe this sort of tendency is closely related to the literary cartel. Yet it is not a totally developed idea, so I will say no more than this.

How is your next book coming along?

As I announced last summer, I have been working on a sequel to my epic novel “Frontier Between Two Empires,” which covers the 1960s. The new book addresses the 1980s, and I attempt to question the credibility of the historical and social memories derived from that era.

I intend to show my readers that there are a lot of illogical parts of history that many people unconditionally accept as facts. In the five years I have spent preparing, I have read 10,000 pages of trial records related to democratic movements.

Since the 1980s is still an incredibly sensitive era, I am trying to take the viewpoint of a spectator.

So are you done with the preparation step? When are you going to actually pen it?

I haven’t started writing it, but I usually start writing when I can fluently talk about it as if it is a book or a movie that I have just finished. In that sense, I am fully prepared to write this down.

In the meantime, do you have any short-term plan aside from penning a new novel?

Once I get over my illness, I plan to leave Icheon and go either to my hometown or Seoul. So I’ve thought about whom I should invite if I hold a farewell party. And I couldn’t think of anyone. Then I realized I have severely isolated myself from the world for a long time. Maybe I was too busy to form a group, focusing on myself and my book.

In October, Minumsa [a publishing company] will print a six-book collection of my short stories and novellas. Going through the manuscript again, I thought to myself that I have lived my life pretty busily. I won’t be called an idle writer.