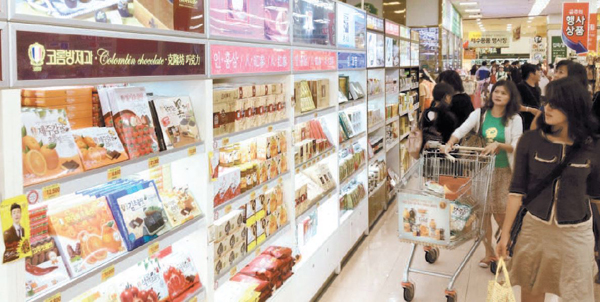 Chinese tourists browse products at the Seoul Station branch of Lotte Mart. Provided by the company

Chinese tourists are increasingly coming back to Korea now that the Middle East respiratory syndrome (MERS) outbreak that began in May has receded.

Retailers are welcoming the return, hoping it can help them recover losses incurred by the exodus of tourists.

Lotte Mart, a large discount supermarket chain, said Sunday that sales from Chinese travelers who shopped at the Seoul Station branch between Sept. 1 to 17 increased by 58.1 percent compared to the same period last year.

Sales from Chinese customers at the Seoul Station branch in June, right after the outbreak of the fatal disease, plunged by 43 percent year on year.

The decline accelerated in July as the Chinese sales fell by 61.3 percent year on year.

The supermarket chain considers sales at the Seoul Station branch a barometer of tourist arrivals since the store is located in a major transportation hub.

Consumption by foreign travelers accounts for 15 percent of the branch’s entire sales.

To keep up the momentum, retailers including Lotte Mart are poised to carry out promotions tailored for Chinese visitors and tap into China’s big holidays in September and October.

The Chinese will observe the Mid-Autumn Festival on Sept. 27, while the weeklong National Day holiday runs from Oct. 1 to 7.

“Ahead of the Mid-Autumn Festival and National Day Holiday, we will bolster marketing targeting Chinese consumers,” said Byun Ji-hyun, a director of the marketing division at Lotte Mart.

As part of the efforts, the retailer will select items that are popular among Chinese and offer 30 percent off until Oct. 31.

The event will take place at the branches frequented by Chinese travelers in Jamsil, Gimpo International Airport and Seoul Station.

Lotte Department Store in Sogong-dong, a favorite shopping destination for many Chinese, also restored sales growth to a level on par with the pre-MERS period.

Sales from Chinese customers between Sept.1 and Sept. 17 at the department store increased by 43 percent compared to the same period last month.