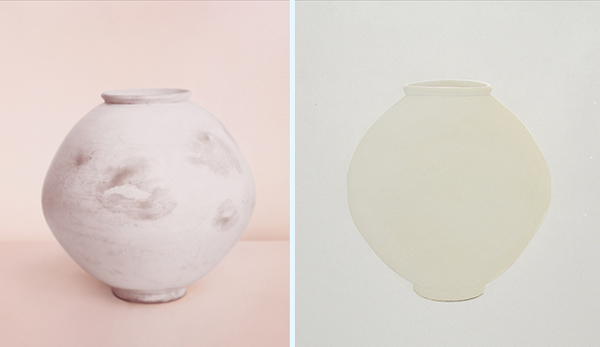 Contemporary artists Koo Bohnchang and Lee Seung-hee both carry on the tradition of white porcelain that began in the Joseon Dynasty (1392-1910), and they have both brought the genre to a whole new level.

Koo, a photographer, takes photos of white porcelain pieces. His photographs, marked by minimalism and modernity, are now famous in Korea and abroad. But when he started, most artists opted to paint the ceramic pieces instead of taking photos of them.

Lee, on the other hand, resists the idea that white porcelain pieces must be three-dimensional. In 2008, Lee, a potter himself, visited Jingdezhen, Jiangxi province, the oldest ceramics center in China, to explore the possibility of making ceramic pieces in two dimensions. Since then, he’s been reinventing ceramic masterpieces in the form of flat-surfaced paintings.

The Choi Sunu House in Seongbuk District, northern Seoul, is holding an exhibition dedicated to these two artists. Titled “Koo Bohnchang and Lee Seung-hee, Searching for the Soul of Joseon White Porcelain,” the show kicked off Sept. 15 with 15 pieces from Koo and 10 pieces from Lee.

Organizers noted that Choi Sunu (1916-84), a renowned art historian and former director at the National Museum of Korea, had an affection for Joseon white porcelain and encouraged contemporary artists like Koo and Lee to carry on the genre’s spirit.

Built in the 1930s, the Choi Sunu House was home to Choi from 1976 to 1984, when he died. The house was bought and preserved by the National Trust Cultural Heritage Fund and now hosts various exhibitions, concerts and other cultural events, mostly free of charge.

She said the fact that it is being held at the Choi Sunu House adds more meaning, as the house is a traditional hanok-style structure, noting that both the artworks and the house connect the past with the present.

“Koo Bohnchang and Lee Seung-hee, Searching for the Soul of Joseon White Porcelain” runs until Nov. 14. Admission is free. The house is open 10 a.m. to 4 p.m. and closed Sundays and Mondays. For more information, visit nt-heritage.org and cafe.naver.com/ntchfund, or call (02) 3675-3401~2.