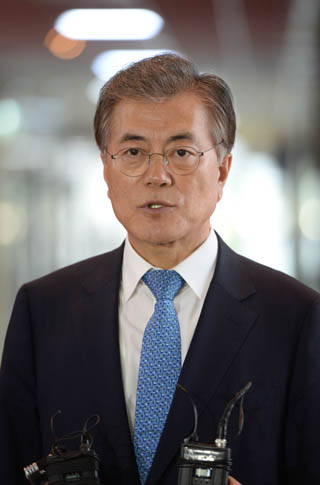 The embattled head of the main opposition party on Monday formally retracted his plan to put his leadership to a vote, vowing to unite liberal politicians to win the next general elections.

“I respect the decision reached on Monday by senior party lawmakers and officials,” Moon Jae-in, the chairman of the New Politics Alliance for Democracy (NPAD), said in a statement, read out by party spokesman Kim Sung-soo.

“I wanted to seek out the opinions of party members and the people, but senior officials, lawmakers, party members and even the reform committee reached a consensus to support me. I will withdraw my plan and humbly accept everyone’s sincere and loyal advice.”

Following its crushing defeat in the April by-elections, the NPAD, the second-largest party inside the National Assembly, has faced worsening internal strife. In an attempt to salvage the party, Moon introduced a reform committee to overhaul the opposition, only to fuel the crisis. He subsequently called for a vote of confidence on Sept. 9.

On Sunday, the NPAD reaffirmed its endorsement for Moon as its leader in a meeting attended by executive party members and lawmakers. They also decided to halt discussions among Moon’s dissenters calling for his resignation.

Of the 30 executive party officials and 129 lawmakers in the NPAD, only 90, including 80 lawmakers, attended the meeting. Moon’s critics, among them Ahn Cheol-soo, Kim Han-gill and Park Jie-won, boycotted the session and criticized the political conclusion reached by Moon’s loyalists - an indication that internal ruptures remain open.

In a clear reference to the unresolved disgruntlement, Moon urged the NPAD to respect and accept the decision of its senior party members and lawmakers to back his leadership.

“I will work harder and bring victory in the next general elections for the sake of liberal unity,” he said.

Earlier in the morning, Moon spoke in unusually resolved tone toward Rep. Chun Jung-bae, a veteran lawmaker who left the NPAD earlier this year. Chun is currently leading a campaign to create a new party in Gwangju and the Jeolla region.

In the April 29 by-elections, Chun ran as an independent and beat out his NPAD rival to represent Gwangju’s Seo-B District, known as a liberal base. The defeat was an embarrassing disappointment for the NPAD, which faced strong backlash as a result.

After declaring his plan to launch a new party on Sunday, Chun sneered at Moon’s earlier proposal that liberals must unite to fight the conservative Saenuri Party in the next general elections. “Mind your own business,” Chun told Moon on Sunday.

In an interview with CBS radio Monday morning, Moon commented that Chun’s remark was “rude.”

He added that the independent lawmaker did not necessarily represent the sentiments of all voters in Gwangju and Jeolla, claiming that liberal voters want unity, not division.

Moon continued, pushing his idea that the nation’s liberals must unite to clinch a victory in the next election.

“I still think he must go with us,” Moon said. “I think Chun is mistaken.”