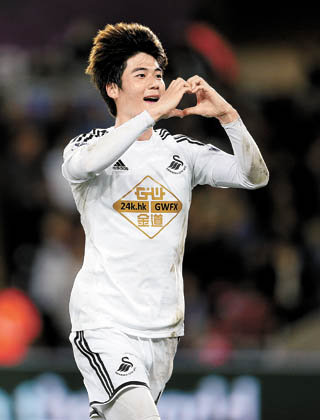 SWANSEA, Wales - On the pitch, Swansea City midfielder Ki Sung-yueng likes to control the midfield and does not hesitate to take on big defenders. In the past, the 26-year-old made some controversial comments that angered some fans, but now he has a more mature outlook.

Ki became a dad on Sept. 13 after his wife Han Hye-jin, an actress whom he married in 2013, gave birth to their daughter.

In an interview last week with Ilgan Sports, an affiliate of Korea JoongAng Daily, the former Glasgow Celtic and Sunderland player says that watching his daughter’s birth was the most special experience in his life and he vows to become a better player for his family.

Ki has been keeping busy recently, not only with the birth of his daughter, but also with his football schedule.

After finishing a league match against Manchester United on Aug. 31, Ki hopped on a plane for Korea to play on the national team against Laos on Sept. 4 and, four days later, he travelled to Lebanon for the 2018 World Cup Asian qualifiers. The Korea national team captain then returned to Swansea to play against Watford on Sept. 12 before returning to Korea to be with his wife for the birth of their daughter.

He then returned to England on Sept. 16 to play an English Premier League (EPL) match against Everton last Saturday. Because of his hectic schedule, he was kept off the pitch until the 60th minute, replacing Gylfi Sigurdsson, but even his best efforts couldn’t change he team’s 0-0 home draw.

Ki, who scored eight goals in his 33 EPL appearances with Swansea, has started only one match in the Welsh football club’s six EPL matches, which raises concerns that the former FC Seoul player has lost his regular starter position with the team.

With Son Heung-min of Tottenham and Lee Chung-yong of Crystal Palace also trying to mark their names in the EPL this season, Ki promised that he will deliver his best performance.

Q. How do you feel about becoming a father?

A. The day she was born is the most special day of my life. With her, I have more responsibility and I think more about my family. On the pitch, I have to perform harder for the sake of my family.

Do you want to raise your daughter as an athlete?

(Laughs). There is no Korean restaurant in Swansea. I couldn’t serve food like what Son presented such as gimbab.

Last season, you had good goal scoring ability. What about this season?

Last season, I had a more aggressive role in offense which is not my usual role. That’s why I was able to score many goals. But this season, I’m coming back to my usual role and trying to deliver passes to teammates instead of scoring.

You started on the bench against Everton on Saturday. Was that manager Garry Monk’s consideration for your hectic schedule?

I think only the manager knows his intention. For this season, I picked up an injury in the season’s opener against Newcastle United, so the competition in midfield became fierce. In addition, our club made good signings this summer and there are lots of players who can carry out my role. Since the depth of our squad got thicker, we will have to watch the situation for a while.

But don’t’ you think playing as a starter is important?

For now, I’m waiting and doing my best when I play. I’m playing as a substitute since I suffered the injury, but playing opportunities are consistently given to me. Regardless of how many minutes I play, it’s important that I can play on the pitch and I have to keep getting playing opportunities.

Have you given some advice to Son Heung-min who is rookie in the EPL?

Heung-min is doing very good, so there is nothing I have to tell him football wise. But in terms of British life, I did tell him a couple things. But I know he will do well by himself in almost every thing.

Not only Son, but Lee Chung-yong and even Park Ji-sung are in London. Did you ever think about playing for London-based clubs?

That’s something I can decide on my own. Daily life can be comfortable when living London, but now I’m with this good football club in Swansea, so right now, I don’t have a plan to go to London. I’m satisfied with this environment that I can focus in football.

The match against Son’s Tottenham is scheduled on Oct. 5 at the Liberty Stadium. What do you expect from meeting Koreans in the EPL?

It’s always exciting to play against fellow Koreans. It’s nice that I can play against Son Heung-min as well as Lee Chung-yong. What’s meaningful is that these Korean players can play together in England.

In the national team, you are given a more offensive role. What do you think?

I’m confident in any position whether it’s offense or defense. What’s important is the position the coach wants me to play. My duty is to carry out that given role and do my best.

Korea will face Kuwait away next month in the World Cup regional qualifiers. Don’t you feel pressured about your stamina?

I have always been playing like this. It’s not the first time I’ve experienced this kind of situation. All Europe-based players travel all over continent and have difficulties. That’s a challenge for me, but I feel that I’m becoming better with these challenges. I don’t think there will be big difficulties.

It is important for my club to go up in the league standings. First, I need to become a player that is considered essential to the team. I hope we can get good results like last season. As a national team member, we first need to advance to the final round of the World Cup Asian qualifiers. I want to show a powerful national team by playing well in every match. BY PI JOO-YOUNG, JOO KYUNG-DON